Scary School by Derek the Ghost

I’m really not sure where to begin when describing Scary School by Derek the Ghost! There are so many things to love!   I found the story to be insanely funny and the illustrations added to the hilarity.  My only concern is that the story was a tad bit too long; I kept wondering what would be left to tell in the sequels. 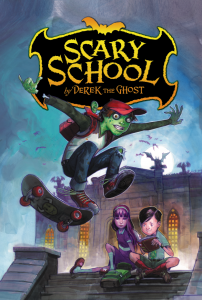 If you’re like me, An Unconventional Librarian, you will appreciate Mrs. T, the T-Rex librarian who wears a blue dress.  What’s conventional about that? Nothing and I LOVE it!

Do you know what else I love about Scary School? Principal Headcrusher.  Not only is the character obviously African American, but, with the exception of her freakishly large hands, displays common African American features.  Additionally, she is not just a side character, but a main character, which is important for young readers of color to witness.  LOVE!

My favorite scene in the story is the retelling of the three little pigs performed by the goblins of Goblin Hill.  You know you’re in for a treat of a story when the opening line says that each little pig has an advanced degree in architecture.  I chucked each time the wolf blew down the goblin’s house the wolf danced to distract the children from the moaning of the injured goblins. The story finishes:

And so all the pigs were eaten by the wolf, as is the correct nature of the food chain. Even the smartest pig on Earth is no match for a hungry wolf who has connections in the demolition business.

Derek the Ghost is on to something here, and I can’t wait to read the next installments (hint, hint).

I wonder if I can get a blue dress like Mrs. T the librarian?