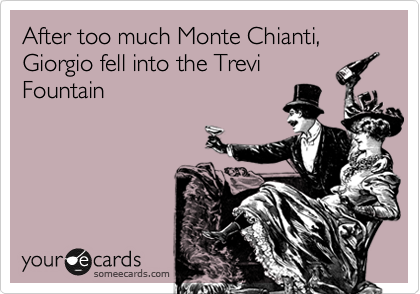 Please enjoy this guest post by Frederick Lee Brooke, author of the genre-bending mystery Zombie Candy. Then read on to learn how you can win huge prizes as part of this blog tour, including $550 in Amazon gift cards, a Kindle Fire, and 5 autographed copies of the book.

What Dad and I saw in Italy
by Frederick Lee Brooke

I was on the train yesterday returning from Rome back to Basel, where I live, and I mentioned Monte Chianti to my seatmate. We were on the Red Arrow, the Italian bullet train, which cruises at 180 mph and covers the distance from Rome to Milan in just under three hours. Rossana is a banker who was travelling to Milan on business; in her hand was a paperback mystery in English. That’s how we started talking. She sort of nodded and looked to the heavens and tried out the name: “Monte Chianti, hmmm. Nice.”

I like Italy so much I decided that the action in Zombie Candy, my latest mystery, should move to a fictional town in Tuscany called Monte Chianti in the second half. The action starts in Chicago, and moves to Tuscany.

But this trip wasn’t really research for Zombie Candy; for me, more of a victory lap. Plus Dad wanted to see Rome once in his life, so off we went on the train. On the way to Rome we spent three days in Como, in Northern Italy. We did not see Giorgio (that’s what the locals call George Clooney) but we did see some beautiful lake vistas. In the picture below we are coming down the side of the mountain in a cog railway. Sure hope the brakes hold on this thing!

I learned Italian at a language school. I also married an Italian speaker, but don’t ever try and learn a language from the person you’re married to. You have enough to argue about without her correcting your grammar. My wife’s English is better than my Italian anyway, but she likes it when I make the effort.

While in Rome Dad and I visited the Trevi Fountain. If you throw in a coin, legend has it that you’ll come back to Rome one day. I threw in a pocketful, just to be sure. Then we hit the Colosseum. The ancient brick dividing walls in the floor of the amphitheater kept the animals penned in before they were sent in to the ring to fight. How can this thing still be standing, after two thousand years?

This is what was left of our rental car after … no wait, just kidding! This mess was parked right outside our hotel, not far from the Vatican. The hotel desk clerk told us a moped caught on fire next to the unfortunate Mercedes. I didn’t believe him — do you?

We took an all-day excursion to the island of Capri, off Naples. This involved a long, cramped bus ride and a transfer to a ferryboat, but let me tell you, the views were worth it. Just look at the color of the Mediterranean, from halfway up the mountain.

And here is a picture looking up at the branches of a mature maritime pine tree. I couldn’t resist.

It was a great trip. Dad and I had some nice talks, we did a lot of walking, we ate like kings, and we saw some beautiful places. I hope that Trevi Fountain legend really works, and we’ll go back to Rome again soon.

As part of this special promotional extravaganza sponsored by Novel Publicity, the price of the Zombie Candy eBook edition is just 99 cents this week. What’s more, by purchasing this fantastic book at an incredibly low price, you can enter to win many awesome prizes. The prizes include $550 in Amazon gift cards, a Kindle Fire, and 5 autographed copies of the book.

About the book: Weaving elements of mystery, horror and romance in a hilarious romp that starts in Chicago and ends in a quaint medieval town in sun-drenched Tuscany, Zombie Candy is a genre-hopping knee-slapper of a novel. Get it on Amazon.

About the author: Frederick Lee Brooke has worked as an English teacher, language school manager and small business owner and has travelled extensively in Tuscany, the setting of part of Zombie Candy. Visit Fred on his website, Twitter, Facebook, or GoodReads.

Out and Equal in the Workplace