Have you read Geography Club by Brent Hartinger? 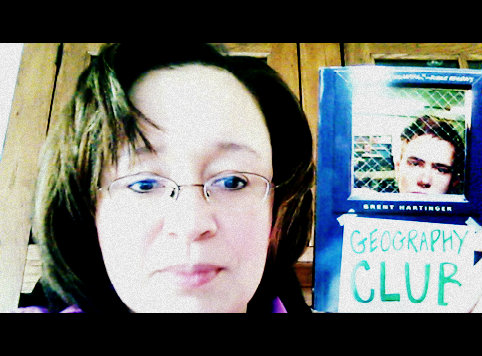 Are you looking for a YA book that discusses issues important to LGBT teens?  You can thank my new bestie Brent Hartinger for bringing it to you!  The Geography Club series contains LGBT teens who arent stereotypically gay and the book is about so much more than that!

I had a chance to chat with Brent and ask him to provide some insight into what’s going on in Geography Club, page 99.  Here’s what he said:

So page 99 of Geography Club. It’s a scene of Russel and Gunnar riding their bikes home from school. Gunnar has pressured Russel (who is gay) into going out with Kimberly’s friend Trish because that’s the only way Kimberly will go out with him. Got all that? Yeah. High school drama much?

One of my favorite things about the Russel Middlebrook Series — one of the things I’m most proud of — is the relationship between the three best friends, Russel, Gunnar, and Min. I probably don’t always achieve what I’m trying to do when I write a book, but so many people have commented to me on how that three-way friendship rings interesting and true that I do sort of feel like I achieved what I had set out to do there. And I think this is one of those scenes where we see why the relationship between Russel and Gunnar ends up such a close one. Whatever doesn’t kill you makes you stronger? That’s true of friendships too.
Here Russel is slowly realizing: Kimberly is only using Gunnar to get him to get Russel to go out with her friend Trish. And Russel’s starting to realize this isn’t going anywhere good: Trish will eventually learn that Russel’s not into her, and Gunnar will eventually realize that Kimberly’s not into him. But Russel can’t quite say of this because it would mean revealing uncomfortable truths — truths that he’s really not ready to deal with yet. He hasn’t yet learned that NOT revealing those truths only makes things much worse in the long run.
That’s one of the big themes of the whole book: basically, that secrets have power only as long as they ARE secrets. Turn on the lights and lets look at the monster in the closet. Whatever it is, it can’t possibly be as scary in the light as it is in the dark.
I guess the other thing I’d say about this page that, well, in general, I get annoyed when adults dismiss or belittle teenage concerns. If you really want to, you can always find a reason to feel superior to other people, but what’s the point of that? What good does that do? All of us who are adults were teenagers once. Did your own feelings not matter then? Because that’s what you’re saying when you dismiss teenager feelings now.
The point is, I wrote this book more than twelve years ago, and I took the feelings of teenagers seriously. I think that’s pretty evident on this page. Anyway, I’m happy to see it on page 99 and elsewhere in the book. I think it explains a lot of this book’s success.
A lot has changed in the world over the last twelve years, but I’d like to think a lot of the emotions in this book still hold up.

Doncha love getting inside an author’s head?  I do!

Now, watch my video for a surprise.

So, whaddaya think? Can’t wait to get your hands on these books? Enter by commenting below.  Contest runs until Midnight May 1st.

Don’t forget to enter the contest to win!