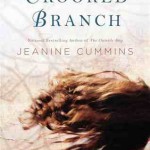 I’m thrilled to host tonight’s book club meeting at Towne Book Center & Cafe because tonight’s meeting will be special; we’ll be visited by Jeanine Cummins, the author of The Crooked Branch (and WINE); woot!

Here’s what they’re saying on Goodreads about it:

rom the national bestselling and highly acclaimed author of The Outside Boy comes the deeply moving story of two mothers—witty, self-deprecating Majella, who is shocked by her entry into motherhood in modern-day New York, and her ancestor, tough and terrified Ginny Doyle, whose battles are more fundamental: she must keep her young family alive during Ireland’s Great Famine.

After the birth of her daughter Emma, the usually resilient Majella finds herself feeling isolated and exhausted. Then, at her childhood home in Queens, Majella discovers the diary of her maternal ancestor Ginny—and is shocked to read a story of murder in her family history.

With the famine upon her, Ginny Doyle fled from Ireland to America, but not all of her family made it. What happened during those harrowing years, and why does Ginny call herself a killer? Is Majella genetically fated to be a bad mother, despite the fierce tenderness she feels for her baby? Determined to uncover the truth of her heritage and her own identity, Majella sets out to explore Ginny’s past—and discovers surprising truths about her family and ultimately, herself.

Me? That’s not quite the way I see it.  I see the book as a story of a new mother struggling with postpartum depression. She stumbles across an old diary about a family in famine-ridden Ireland in 1848. What a fascinating story of the struggles of the family in Ireland! I was tempted to just skip every other chapter and read only about the family in Ireland.  I’m glad I persevered because the end was satisfying. Still some unanswered questions but I’m sure I’ll ask the author tonight when I see her!

Easy to read; enjoyable! I give it 3 paws for showing us that motherhood is not easy and that not all mothers are nice and easy (or likable).