It’s day C of the A to Z Challenge and it’s so difficult to choose one book! 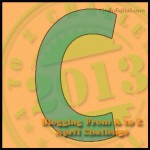 Because I can’t choose just one, here are 3 books that caught my eye. Let me know what you think: 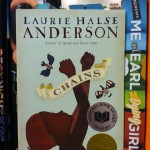 Chains by the great Laurie Halse Anderson. Anderson’s books are always thought provoking and in my area, almost always on the required reading list.  Here’s what Goodreads says:

As the Revolutionary War begins, thirteen-year-old Isabel wages her own fight…for freedom. Promised freedom upon the death of their owner, she and her sister, Ruth, in a cruel twist of fate become the property of a malicious New York City couple, the Locktons, who have no sympathy for the American Revolution and even less for Ruth and Isabel. When Isabel meets Curzon, a slave with ties to the Patriots, he encourages her to spy on her owners, who know details of British plans for invasion. She is reluctant at first, but when the unthinkable happens to Ruth, Isabel realizes her loyalty is available to the bidder who can provide her with freedom.

And you know anything multicultural is number one in my book, right?

Next is the delightful Conjure by Lea Nolan. 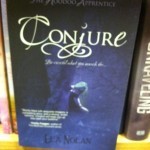 Conjure is a story from South Carolina low country and a young girl who falls in love and learns how to conjure spells.  It’s spooky, thrilling, and empowering all at the same time.  I feel like Lea Nolan is my bestie and she’s so easy to talk to on Facebook.  Check her out at LeaNolan.com.   Did I mention there is great slave history built into the story? yep.  She’s awesome like that.

And finally, the very popular Crossed from Ally Condie, part of the Matched trilogy. 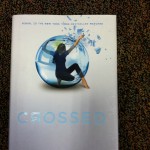 This series has been on my TBR list for sooooo long. I hope to get to it soon! Here’s what they’re saying on Goodreads about it:

In search of a future that may not exist and faced with the decision of who to share it with, Cassia journeys to the Outer Provinces in pursuit of Ky – taken by the Society to his certain death – only to find that he has escaped, leaving a series of clues in his wake. Cassia’s quest leads her to question much of what she holds dear, even as she finds glimmers of a different life across the border. But as Cassia nears resolve and certainty about her future with Ky, an invitation for rebellion, an unexpected betrayal, and a surprise visit from Xander – who may hold the key to the uprising and, still, to Cassia’s heart – change the game once again. Nothing is as expected on the edge of Society, where crosses and double crosses make the path more twisted than ever.

As if there’s anyone on the planet who doesn’t know about Matched, right?

So tell me, have you read any of these?