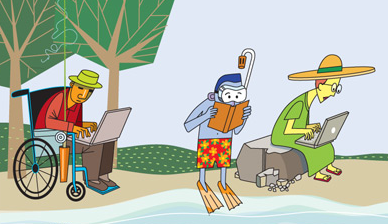 Writers, mark your calendars. The James River Writers Conference is celebrating its 11th
year as one of the most prestigious gatherings of published authors, literary agents and editors in the country with a two-day event that will inspire and educate writers on the rise.

The James River Writers Conference returns to Richmond on October 19 and 20 with an impressive lineup of  literary professionals, writing workshops and opportunities for aspiring writers to pitch their book ideas, hone their skills and connect with nationally recognized authors and publishers.

Year after year, the conference is lauded for its remarkable programs and its noteworthy influence on the writing community. It’s no wonder why hundreds of people have been flocking to central Virginia each fall since 2003.

“The James River Writers Conference [is] one of the best writers’ conferences in America,” says David Henry Sterry, of The Book Doctors. “If you’re a writer, do yourself a favor, get yourself to Richmond, Va., and go to this conference. It’s filled with warm, generous, talented writers, editors and agents.”

Registration for the annual conference is open, and writing sessions are already filling up. Find more details and a full list of programs at JamesRiverWriters.org.

#Kidlitcon is the New Beyonce

CoSchedule it and Forget it: A Tutorial for Organizing your Book Reviews and your Life