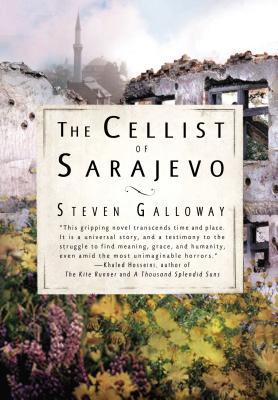 Wow. I REALLY liked The Cellist of Sarajevo. Not that I didn’t expect to, but WOW. Because I’m submerged in fantasy reading most every day, when I stumble into the real world of reality fiction I almost don’t know how to behave.

That’s kind of how I felt reading The Cellist of Sarajevo. I mean for many young adults, they will not even know that there WAS a war in Sarajevo, right? So, when you read about wars and bombing and snipers you figure the book has to be:

right? I mean, what’s going on in Bosnia for Pete’s sake and where is it?? Many of us, however, remember that the old beautiful historic town of Sarajevo and the surrounds welcomed the world during the 1984 Olympics! How could a place that so recently hosted the Olympics be war torn?

Well they did. Not to get too much into it but that area split apart and what ensued was a civil war. So as I was reading the book and visualized the characters walking the streets and dodging bullets to get to bread line or to collect water for their family, it feels like a WWII novel. But it’s not. It’s 1992 (or thereabouts)!

When a cellist who used to perform at at the music hall vows to play his cello in the ruins of the theater he used to perform in, a sniper is assigned to guard him.  What follows is the intersection of three very different lives.

The language is sparse, unemotional and full of remorse for a beautiful and broken city. I feel a road trip coming on!