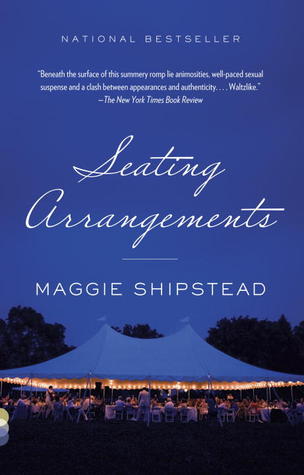 This month’s book club pick was Seating Arrangements by Maggie Shipstead.  Here’s a blurb from Goodreads.com:

Maggie Shipstead’s irresistible social satire, set on an exclusive New England island over a wedding weekend in June, provides a deliciously biting glimpse into the lives of the well-bred and ill-behaved.

Winn Van Meter is heading for his family’s retreat on the pristine New England island of Waskeke. Normally a haven of calm, for the next three days this sanctuary will be overrun by tipsy revelers as Winn prepares for the marriage of his daughter Daphne to the affable young scion Greyson Duff.  Winn’s wife, Biddy, has planned the wedding with military precision, but arrangements are sideswept by a storm of salacious misbehavior and intractable lust: Daphne’s sister, Livia, who has recently had her heart broken by Teddy Fenn, the son of her father’s oldest rival, is an eager target for the seductive wiles of Greyson’s best man; Winn, instead of reveling in his patriarchal duties, is tormented by his long-standing crush on Daphne’s beguiling bridesmaid Agatha; and the bride and groom find themselves presiding over a spectacle of misplaced desire, marital infidelity, and monumental loss of faith in the rituals of American life.

Hilarious, keenly intelligent, and commandingly well written, Shipstead’s deceptively frothy first novel is a piercing rumination on desire, on love and its obligations, and on the dangers of leading an inauthentic life, heralding the debut of an exciting new literary voice.

Rarely have I disliked a book as much as I disliked this book.  The paperback cover shows a lovely summer evening party under a tent, so I had high hopes for a lovely wedding weekend tale.  Instead the book is about Winn Van Meter, a self absorbed rich husband who can think of nothing save getting admitted into the one club he’s not been admitted to.  I just couldn’t like him.  And as I got further into the story, I couldn’t like the people too.

Because I believe that life is too short to read a book you don’t like, I didn’t finish it.  Well, let me clarify; I stopped at page 80 and read the last two chapters. So I “finished” the book and at least I know what happens in the end.  The greatest aspect of book club is the discussion.  I was not alone in my dislike for the book; most of the 20+ members didn’t care for it either.  One fellow went so far as to say “I hate anything wedding!”

So there you have it.  Sorry Maggie Shipstead we didn’t like your book but your writing was not bad.  I’d like to give you another try and see if I like any of your other works.  I hear you’re quite accomplished.

Have you read Seating Arrangements?