The Truth about Forever by Sarah Dessen 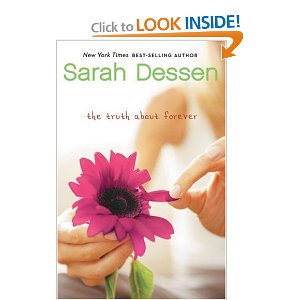 Pumpkin has enjoyed several of Sarah Dessen’s books and asked me to read The Truth about Forever.  I enjoy sharing books with my kids so I eagerly picked it up.  Dessen writes about teen girls and the topics that most interest them: boys.  I love that Dessen’s stories do not contain foul language or sexual behavior.  There are some instances of drinking, however, but you can’t expect a story about teens to be totally clean, can you?  I wouldn’t mind someone in the story learning a lesson about teen drinking, but that’s just my personal feeling.

Briefly, The Truth about Forever centers around the main character, Macy, a young teen who recently lost her father and lives with her surviving parent.  Macy’s boyfriend goes away for the summer and Macy discovers that she is unhappy with the cold, unemotional state of her relationships.  Throughout the book, Macy discovers the level of emotion she is comfortable giving and receiving.

While enjoyable, I found the book a slow read.  I think the story dragged on a little too long.  I lost interest three-quarters of the way through and put it down, reluctant to pick it back up.  Once finished though, I was satisfied with the ending.

My biggest complaint is the lack of diversity within the story.  While not openly stated, it is obvious the main characters are white, upper middle class.  The minor characters are slightly more diverse: orphaned, abused, sent to reform school, working class.  I would love to see a main character of a different ethnicity or from a different social class, as representative of Dessen’s readers.

As I think about this genre of what I’ll call teen chick lit, I cannot stop wondering why the storylines center on dating.  Surely teen girls have other interests?  And why does Macy  need a boyfriend?  Do all female characters need a mate to define themselves?  Macy defines herself by what her boyfriend wants her to be.  Initially, when he goes away she struggles to identify herself.  Her mother suffers similarly.  The mother, who lost her husband, is struggling to identify with herself without her husband.  Consequently, she becomes a workaholic.

Is the message being inferred that women are incomplete without men?  Neither the mother nor Macy has any female friends outside of their relationships with their men.  Macy gains new friends during the book, however; there is little mention of prior friends.  Pumpkin tells me that many of Dessen’s characters are loners. And what of our self-esteem?  Where are the female characters who are strong willed, open minded, adventurous, or smart, quirky, and funny?  Do young women really want to be overly protected and owned like Bella in Twilight?  Why can’t young women be more like Hermione from Harry Potter: smart, adventurous and capable of liking herself regardless of whether he has a boyfriend?

I stand down from my soap box.