An Interview with The Girl who Came Home author Hazel Gaynor

The Girl Who Came Home 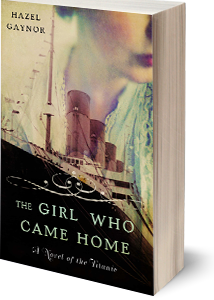 “Maggie Murphy stood alone and unnoticed on the doorstep of the thatched stone cottage that three generations of her family had called home.”  We learn very early on that Maggie is sailing to America on RMS Titanic from Ireland.  Poor Maggie is forced to leave her homeland and her beloved Seamus on the ship destined to sink! But before we go any further, let’s chat with Hazel Gaynor, the author a bit and see what’s inside her brain.

UNCONVENTIONAL LIBRARIAN:  Like many women, I love all things Titanic related! I thought it would be fun to ask you questions and  eat your brain. Thank you for subjecting yourself to us today. Let’s get started.  Do you drink coffee?

HAZEL GAYNOR: Yes! Too much!

UL:  Is there really such a thing as too much coffee? Do you like donuts or cookies? Do you dunk?

HG: I like both, although you have to be quick to get your hands on either in my house – my husband and two children all have a very sweet tooth. I have to admit that I have never dunked a donut – I must rectify this as soon as possible!

UL: OMG for sure! We can’t be besties if you’ve never dunked! Noshing while drinking coffee and reading are my most favorite activities.  Speaking of books,  how did your book get started?

HG: I was a teenager when the wreck of Titanic was discovered by Robert Ballard in 1985 and have been fascinated with the ship and the events of April, 1912, ever since. I have said many times in the years since then that I would write a novel about Titanic one day – it just took a little time! When I started my research for the novel, I came across the record of a survivor from a small parish in County Mayo, Ireland. From there, I discovered the history of a group of Irish emigrants – now known locally as the Addergoole Fourteen – who travelled together on Titanic. I knew immediately that I’d found the inspiration for my novel. I wanted to explore the experience of a third class passenger on Titanic, the aftermath of the disaster and how such an event can have far-reaching repercussions on a survivor’s life. Through my character, Maggie, I hope to allow readers to immerse themselves in an aspect of the Titanic disaster they might not have previously considered.

UL: What else have you written?

HG: Can we ignore my first attempt at writing a novel, which is now hidden under my bed? Good!  Apart from that, I wrote a successful parenting blog for several years before seriously starting to write novels. In addition to my debut, THE GIRL WHO CAME HOME, my second novel, DAUGHTERS OF THE FLOWERS, is scheduled for publication in early 2015. It is about two sets of sisters and is set around a charity for orphaned flower sellers in Victorian London. The story spans several decades across the late 1800s and early 1900s. I love the era and the atmosphere of street life in late Victorian London and it was a wonderfully haunting period to explore. I am very excited about the book’s publication early next year.

UL: I love the idea of your next book.  If you could have any superpower what would it be?

HG: I would love to have the power to tidy my desk in an instant. It is currently possessed by an evil being known as DISORGANISATION GIRL.

UL: Ooooooo Disorganization Girl, I know her!  She possesses my house too. She needs to go away! What makes you happy?

HG:  My children. Satisfied readers. And writing THE END.

UL: yes, Yes, and YES. Although sometimes it’s difficult to say goodbye to a good book. Wrapping up now, anything else you want to tell us?

HG: I could tell you about the time I was so immersed in my writing that I forget to collect my son from school, but let’s just keep quiet about that for now. (the apology ice cream more than made up for it, by the way!)

Did you know that Hazel has a Pinterest board? Yes, it’s full of FABULOUS images that are inspired by The Girl Who Came Home.  Here’s the link: Check it out, it’s really interesting to see real images from the Titanic.  It’s also very inspiring to see the faces of those who survived.

Because I hate spoilers, I’m not gonna tell ya what happens.  You’ll hafta get it for yourself.  Don’t be an eejit. Get the book. Read it. Love it.