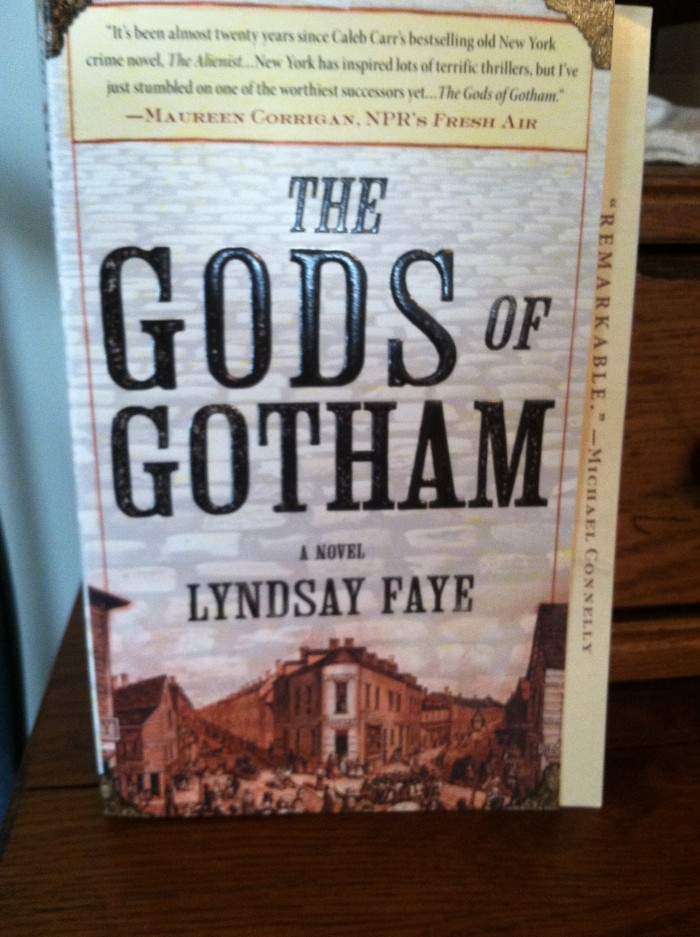 I considered wearing a cowboy hat while writing this post, but I decided against it because…well, because.  I guess  because a cowboy hat is the closest item of clothing I could think of that might remind me of the newly formed New York City police department in 1845.  Yeah, I didn’t know that prior to that, Gotham had no police force either.

So, here we are with this delightful book by my bestie Lyndsay Faye, The Gods of Gotham which was published in 2012.  It’s just been re-released in paperback and am I glad!  Now more people can enjoy the tale of officer Timothy Wilde, the reluctant police officer.  He does the wrong thing but for the right reasons.  You kinda hafta love the poor sod as he can’t really help himself.  He’s a police officer in a world of poor people just trying to earn a day’s wages so they can stay alive.  Unfortunately, these days wages often include prostitution, theft, murder, and other sorts of vagaries.  And here’s young Wilde, just barely one step above them.  Enter a small child covered in blood with an outrageous story that sends Wild discovering the truth, about himself and the community of immigrants with whom he lives.

Fortunately,  the hen (Lyndsay) has decided to cap in with me and have a  palaver about the book and life.   I asked her a few questions:

UNCONVENTIONAL LIBRARIAN: Do you drink coffee?

LYNDSAY FAYE: No.  I’m a very wiry, highly strung person with a heartbeat like a hummingbird’s.  Coffee makes me nervous and irritable.  I drink massive amounts of tea, however, preferably floral or aromatic teas like Earl Grey or green jasmine.  If I do drink coffee, it’s going to be at around four in the afternoon. My beautiful husband is a massive coffee snob, loves trying swanky blends, but I can’t taste the difference.  Ask me a question about beer and I can be much more articulate.

UL: I don’t require coffee drinking so much as much as I require your desire to bring me a cup, so that’ll do.   Do you like donuts or cookies? Do you dunk?

LF: I don’t have much of a sweet tooth, but open a package of chips in front of me and it’s all over.  That being said, I can be tempted by the rose flavored donuts from The Donut Plant, which feature rose water pudding, rose water glaze, and an edible candied rose petal, or else their tres leches donut. That was an incredibly specific answer, my apologies.  But go to The Donut Plant if you are in NYC.  I am deeply serious about this instruction.  I don’t dunk because it’s extremely unlikely for me to be drinking coffee at the same time as eating a donut at The Donut Plant (go to The Donut Plant).  Their matcha green tea donut is also pretty wild.

UL:  Oh my heavenly stars.  I have got to get to this donut place! Now, where was I? How did your series get started?

LF: I wanted to see what day one, cop one of the NYPD looked like.  And I wanted an un-Sherlockian hero, one who wears his heart on his sleeve and doesn’t believe himself to be talented at crimesolving and is reluctantly dragged into it all.  Like, a tiny scrapper who solves things largely due to raw talent and intuition.  Enter Timothy Wilde.  I also wanted to play with an extremely unreliable narrator, and Tim can be completely blinkered when it comes to his loved ones–typical human condition, really.  Everyone loves him because he’s so well-intentioned, but really he’s a complete arse.  I love that little ball of pent-up angst.

UL: I wouldn’t really say Tim is an arse.  Ok maybe he is but he’s a bene bloke.  I like him.  What was your first book? 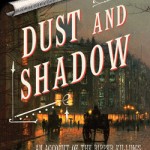 LF: Thank you for asking.  It was not, as countless reviewers would have it, The Gods of Gotham–it was a pastiche pitting Sherlock Holmes against Jack the Ripper.  I adore Sherlock Holmes and John Watson.  They have my heart.  So my first book, Dust and Shadow, is a dark adventure exploring the most beautiful literary friendship of all time, mixed with the historical true facts of the Ripper murders.

UL: Gripping stuff. Have you ever thought of putting a ukelele playing librarian into your book?

LF: I have, but I’ve hesitated because I feel as if the ukelele-playing librarian should take center stage rather than being a guest star, so I’ll have to complete the Timothy Wilde novels before embarking on a new series featuring that protagonist.

UL: Maybe so but how fun would it be if she turns up dead or in a cranky-hutch? Could be interesting…? Share with us how your obsession with Sherlock (of the Benedict Cumberbatch type) came to be.

LF: Oh, I’m obsessed with every incarnation of Sherlock Holmes.  I was ten, my dad told me to read “The Adventure of the Speckled Band,” good night Vienna.  Over time, Sherlock Holmes has stopped being a hobby for me and turned into a lifestyle choice.  I’m a part of the Baker Street Babes podcast on the subject, I’m an Adventuress of Sherlock Holmes (we meet monthly), I write regular short pastiches for the Strand Magazine, the theme song for the Granada Holmes series played at our wedding, I’m a Baker Street Irregular, I host several Sherlockian events per year included a benefit for Wounded Warrior Project with the Babes.  It’s madness. I love it.  And I do adore Benedict Timothy Carlton Cumberbatch, the man is a complete lovemuffin.

UL: Agreed. He is yummy. If you could have any superpower what would it be?

LF: Flight.  Definitely flight.  I have flying dreams sometimes and they make me very happy.

UL: Me too! What makes you happy?

UL: Anything else you wanna tell us?

LF: I have an abnormally long tongue.  I can stick it in either nostril.

UL:  Helpful skill when the zombies come, I’m sure.

So HEY folks, how fun was that??

Lyndsay’s new book drops in a few short days and while Lyndsay will be partying without me on the 18th, I’ll be reviewing Seven for a Secret, the latest escapades from my buddy Timothy Wilde! Stop back on the 19th for my review and a fun GIVEAWAY!!