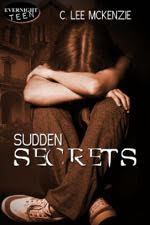 That’s why I was so stoked to read Sudden Secrets by C. Lee McKenzie. The first thing I hafta tell you about this book is that the main character’s name is Cleopatra Brown. I”m sure you can figure out who she’s named after, right?  Well, C.Lee is a friend of mine and I have a cat named Cleo (Cleopatra Jones) so maybe MY Cleo was the inspiration for this heroine?

So Cleo moves into  a new house in a new neighborhood after a mysterious family accident.  Cleo’s family is estranged and there’s something spooky going on in the abandoned house across the cul de sac from her house.  I love the premise for this story, it reminds me of Nightmares by Jason Segal, which is written for tweens.  Sudden Secrets is for teens, however, due to a few underage drinking situations. I’d say, 13 is a good starting age for this book.

Anyway, Cleo the girl, not Cleo my cat, decides to uncover the mystery surrounding the old Victorian across the street.  Meanwhile, there’s typical teen drama, love triangles and homework and a mysterious pizza guy who figure into the equation.  Cleo’s parents are estranged.  The father is on an archeological dig in Afghanistan and mom hides away at the museum curating Egyptian artifacts.  The parental jobs feel alot like Rick Riordan’s The Kane Chronicles, because those heroes are descendants of  Egyptian gods.

Another bit I love about Sudden Secrets is that there is a mention of Boo Radley.  You gotta love it when a book is mentioned in a book! Just the right length of book for a lazy summer afternoon read.  While this title doesn’t qualify for the Diversity Challenge families dealing with grief certainly get my attention.  I’m not loving the cover but it does evoke a dark mood but the book isn’t really as dark as the cover would have you think.

Anyway, you be the judge and let me know!

I’ll be interviewing her soon so check back often, mkay?