Interview with Maggie Mitchell Author of The Big Stink 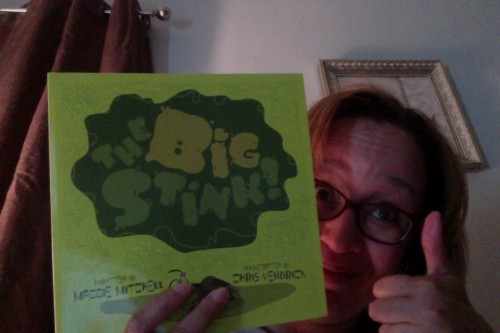 I love having friends who write books for ME! I have a friend, Maggie Mitchell, who among other things is a children’s writer. She wrote a lovely

book called the Big Stink, which I will be reviewing later.

Mags graciously sat down with me for a lil ole interview.  Let’s step into the mind of Maggie Mitchell, shall we?

UNCONVENTIONAL LIBRARIAN: Welcome to our interview! Let’s get started. Do you drink coffee?

MAGGIE MITCHELL: I haven’t had any caffeine in 5 weeks! I don’t need a medal or a parade for that feat, it’s just something I wanted to do for my own personal health. Prior to that point, however, I did enjoy coffee ‘drinks,’ but I never got into a cup of joe from a countertop coffeepot. Say that three times fast.

MM: No dunking. I like my beverage & carbohydrate entities to remain separate, unless there are Oreos and milk involved. I love to bake cookies…and eat them…but if I had to choose, I’d go with a donut that someone else made!

UL: Donuts for the win! We’re kindred spirits. How did your book get started?

MM:  After my daughter was born in 2010, I had a great compulsion to write. I wrote The Big Stink as a response to a particularly profound stink bug invasion that fall, coupled with sad, sad stories I was hearing on the news about the outcomes of bullying in schools. I took something serious and something not-so-serious and developed a story. I love that inspiration can just strike! I was open to it and it found me and I have a book to show for it as the proof!

UL: That’s the great thing about inspiration; it STRIKES! So, tell me, what else have you written?

MM: I wrote Kacey the Papercat in 2012, which is a poetic ode to our big male Tuxedo cat. He’s actually laying at my feet as I type this. I used to write my own blog, but as my daughter got older and when my son was on his way (he was born in December 2014), it became clear to me that blogging was not the way I wanted to use my “extra” time, so I went off the grid. I like it off the grid. I think I’ll stay.

UL: (singing: “Kacey the Papercat…something something where it’s at.”) I hope you like the theme song I just wrote for you. If you could have any superpower what would it be?

MM: Since I am a mom, I can already read minds and predict the future, so those are out. I’m going to have to say flying. If I’m going to be up high, though, I like going fast. I am not a fan of ferris wheels. My superpower would have to be fast flying.

MM: I think most moms out there would agree with me when I said that seeing my children happy makes me happy. However, I’m going to come right out and say that being alone also makes me very happy. There is nothing so lovely as taking a nap in the middle of the day and waking up naturally to a quiet house. Or sitting on the beach for as long as I like without interruption. I think I’ve done those things before, perhaps in a past life.

UL: hmmmm I can agree.  Something about being alone with your thoughts is glorious. Wrapping up now, anything else you want to tell us?
MM:Wear sunscreen, don’t be afraid of color & mixing patterns, and, from Death of a Salesman, “It’s not what you say, it’s how you say it. Because personality always wins the day.”
UL: Well said, Mags.

Isn’t Maggie just the coolest? Stay tuned for my review of her anti bullying book on this channel!