Want to Try Reading Something Different? 4 To Try: Middle Grade

Ever found yourself wanting to try a new type of book abut don’t know what to try? To be sure, trying a new genre can be either rewarding or a failure; I mean what if you hate the book while you’re reading it? I always say life’s too short to continue to read a book you don’t love. You have my permission to put it away and pick up something else. I took a chance recently on a book by Neil Gaiman, you know, the man who wrote Coraline (which I thought was super creepy)? Well last year he wrote a book called Ocean at the End of the Lane. I loved it! The writing was so beautiful I thought, wow, look at all this great writing I’m missing out on.

So, you could get lucky byÂ trying something new. Â Here are four books you might want to try: 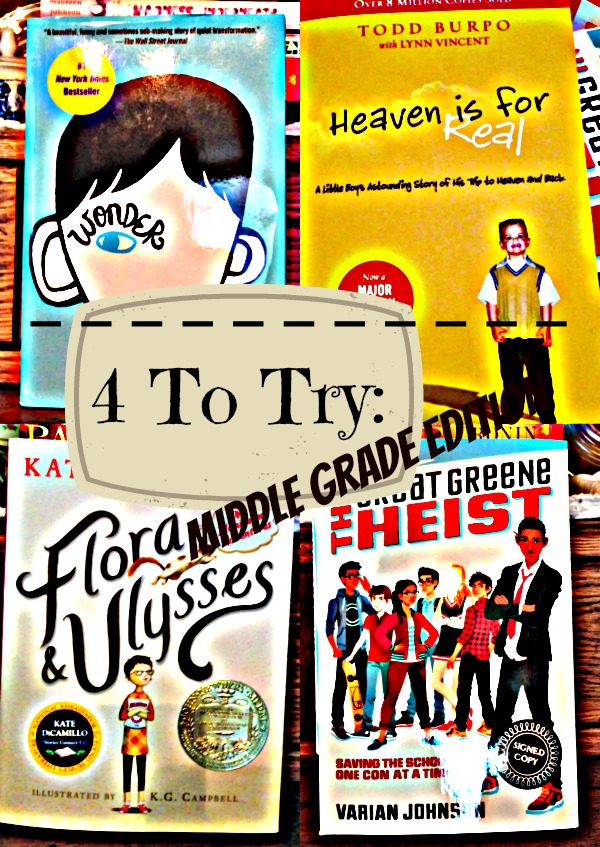 Let’s start with the book on the top left:

I won’t describe what I look like. Whatever you’re thinking, it’s probably worse.August (Auggie) Pullman was born with a facial deformity that prevented him from going to a mainstream schoolâ€”until now. He’s about to start 5th grade at Beecher Prep, and if you’ve ever been the new kid then you know how hard that can be. The thing is Auggie’s just an ordinary kid, with an extraordinary face. But can he convince his new classmates that he’s just like them, despite appearances?

Around here, it’s on many required reading lists. Â If you’ve wanted to check this book out, why not now?

Heaven is for Real by Todd Burpo

When Colton Burpo made it through an emergency appendectomy, his family was overjoyed at his miraculous survival. What they weren’t expecting, though, was the story that emerged in the months that followed–a story as beautiful as it was extraordinary, detailing their little boy’s trip to heaven and back.Colton, not yet four years old, told his parents he left his body during the surgery-and authenticated that claim by describing exactly what his parents were doing in another part of the hospital while he was being operated on. He talked of visiting heaven and relayed stories told to him by people he met there whom he had never met in life, sharing events that happened even before he was born. He also astonished his parents with descriptions and obscure details about heaven that matched the Bible exactly, though he had not yet learned to read.With disarming innocence and the plainspoken boldness of a child, Colton tells of meeting long-departed family members. He describes Jesus, the angels, how “really, really big” God is, and how much God loves us. Retold by his father, but using Colton’s uniquely simple words, “Heaven Is for Real” offers a glimpse of the world that awaits us, where as Colton says, “Nobody is old and nobody wears glasses.”

I tend to shy away from obvious religious books because I don’t want to offend or appear to favor one over the other. What I like about the book is how the book is supposedly told from the viewpoint of the little guy; which appeals to the little kid inside me. Â Also? Nobody wears glasses? TOTALLY COOL.

Aside from the fact that everything Kate writes turns to gold, who doesn’t want to read a book about a person named Ulysses? Or rather a squirrel, but no matter:

Holy unanticipated occurrences! A cynic meets an unlikely superhero in a genre-breaking new novel by master storyteller Kate DiCamillo. It begins, as the best superhero stories do, with a tragic accident that has unexpected consequences. The squirrel never saw the vacuum cleaner coming, but self-described cynic Flora Belle Buckman, who has read every issue of the comic book Terrible Things Can Happen to You!, is the just the right person to step in and save him.What neither can predict is that Ulysses (the squirrel) has been born anew, with powers of strength, flight, and misspelled poetryâ€”and that Flora will be changed too, as she discovers the possibility of hope and the promise of a capacious heart.Â

What thrills me about this book is that it’s part novel and part comic book. Aside from the fact that the main character is a self proclaimed cynic. What’s up with that?

Hilarity, supposedly. We should check it out together.

This book should be a no brainer. The cover should give it away. Why am I interested in this book? Look at the different ethnicities of kids on the cover. I LOVE IT!

Saving the school — one con at a time.Jackson Greene has reformed. No, really he has. He became famous for the Shakedown at Shimmering Hills, and everyone still talks about the Blitz at the Fitz…. But after the disaster of the Mid-Day PDA, he swore off scheming and conning for good.Then Keith Sinclair — loser of the Blitz — announces he’s running for school president, against Jackson’s former best friend Gaby de la Cruz. Gaby hasn’t talked to Jackson since the PDA, and he knows she won’t welcome his involvement. But he also knows Keith has “connections” to the principal, which could win him the election whatever the vote count.Â So Jackson assembles a crack team:Â  Hashemi Larijani, tech genius. Victor Cho, bankroll. Megan Feldman, science goddess. Charlie de la Cruz, reporter. Together they devise a plan that will take down Keith, win Gaby’s respect, and make sure the election is done right. If they can pull it off, it will be remembered as the school’s greatest con ever — one worthy of the name THE GREAT GREENE HEIST.

Sounds great, right? Think Ocean’s 11 meets High School Musical. Without the singing, of course. I can’t WAIT to get my hands on this multicultural book. Â Some publishers make my heart go pitter pat.

So…what do you think? See anything you might want to try? Let me know!