So This is Paris: Crossing the Line (A Paris Homicide Mystery) by Frédérique Molay

So This isÂ Paris: Crossing the Line (A Paris Homicide Mystery)

Today’s post is an interview with author Frederique Molay, author of the Paris Homicide Series (The 7thÂ WomanÂ andÂ Crossing the Line).Â Â Her latest book, Crossing the Line, Â will be released in print (yay!) in September.

Imagine Christmas in Paris and an uneasy feeling that something is very wrong in the case you are investigating.Â Chief of Police Nico Sirsky returns to work after recovering from a gunshot wound. Heâ€™s in love and rearing to go. His first day back has him overseeing a jewel heist sting and taking on an odd investigation. Dental students discovered a message in the tooth of a severed head. Is it a sick joke? Sirsky and his team of crack homicide detectives follow the clues from an apparent suicide, to an apparent accident, to an all-out murder as an intricate machination starts breaking down. Just how far can despair push a man? How clear is the line between good and evil?

What led you to be a writer?

I started writing when I was eleven years old. By that time, I was already passionate about reading and very intrigued by the mechanisms behind created suspense. I felt a need to create and recount my own stories and to share emotions with readers. And once I got started, I just couldnâ€™t stop.

The 7th Woman won a prestigious crime fiction award. It is full of police procedure and forensics, with very detailed descriptions. What did you do to be able to go into such detail?

Before I started writing it, I did a lot of research in the field. I went to various sites, I interviewed police detectives, forensic scientists, coroners and judges, so that my characters would be credible. Writing gives me an excuse to meet people who share a real enthusiasm for their work with me, and I find that fascinating. And then my job as a novelist is to mix that reality with story.

In the second Paris Homicide mystery, Crossing the Line, there are just as many juicy details. It takes readers into the world of body donation. Did you actually visit the institutions mentioned in the book? 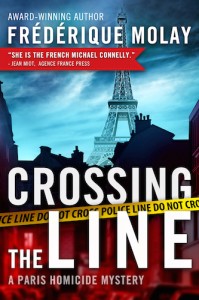 Yes. I spent time haunting the halls of the medical school and attending dissections, and meeting some colourful personalities on the way. There were times what I saw sent shivers up my spine, but these things do exist in real life. Some people say that mystery writers are trying to come to grips with their own fear of death, and maybe that explains our fascination with it.

Nico Sirsky is a very likable character, who is both very human and good at his job with a strong sense of professional ethics. How do you create a character like that? Did a real person inspire him?

Nico Sirsky is certainly a novelized reflection of the police detectives I had a chance to meet at Parisâ€™s mythic police headquarters. And, Iâ€™ll admit that I was certainly a little influenced by the positive comic book super heroes, which make me dream.

How do you work? Are you very disciplined?

I need to write on a regular basis. Writing requires a lot of effort and the capacity to question yourself permanently if you want to make any progress. Not to mention that the need to write is like a tidal wave you canâ€™t resist.

Doesn’t that sound great? I can’t wait to read this title. Â See you next time! 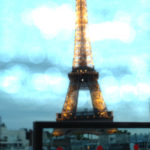