The Pregnancy Project by Gaby Rodriguez 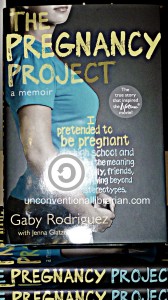 It started as a school project…but turned into so much more.

Growing up, Gaby Rodriguez was often told she would end up a teen mom. After all, her mother and her older sisters had gotten pregnant as teenagers; from an outsider’s perspective, it was practically a family tradition. Gaby had ambitions that didn’t include teen motherhood. But she wondered: how would she be treated if she “lived down” to others‘ expectations? Would everyone ignore the years she put into being a good student and see her as just another pregnant teen statistic with no future? These questions sparked Gaby’s school project: faking her own pregnancy as a high school senior to see how her family, friends, and community would react. What she learned changed her life forever, and made international headlines in the process.

In The Pregnancy Project, Gaby details how she was able to fake her own pregnancy—hiding the truth from even her siblings and boyfriend’s parents—and reveals all that she learned from the experience. But more than that, Gaby’s story is about fighting stereotypes, and how one girl found the strength to come out from the shadow of low expectations to forge a bright future for herself.

One cold night in January 2012 I sat in on an event at my local bookstore, Towne Book Center.  That night, a young woman, Gaby Rodriguez, talked about her book The Pregnancy Project.  Following are my thoughts after meeting this extraordinary young woman.

It is not uncommon these days for high school seniors to work on some sort of senior project; a project meant to be a culmination n of their final year of school and express the child’s personality, skills, dreams, and organizational tools.

Gaby Rodriguez’s senior project changed her life, and hopefully those of other teens.  Gaby, a confident and self-assured young Latina woman, believed she was destined for greater things than those of her peers.  Rodriguez also believed that she had a voice and a choice in every decision she made.  Her voice has come from the controversy surrounding The Pregnancy Project.  Gaby’s voice says you have choices: don’t let any one choice you make define or limit you.

Gaby’s choice to fake a pregnancy intended to show young Latina women in her community that pregnancy isn’t your only option in life.  She believed that if you become pregnant, that pregnancy shouldn’t stop you from moving forward.  Rodriguez encouraged her friends to “go past” the circumstances they were in.

A year later, due to her compelling message, Rodriguez’s voice has been heard and hopefully will continue to be heard.  The Pregnancy Project has been picked up by The Lifetime channel and turned into a movie starring Alexa Vega from Spy Kids.

Gaby and I even had time for a photo! 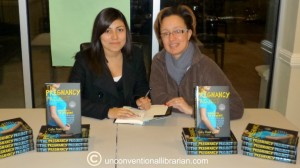