Nick and Tesla’s Solar-Powered Showdown: A Mystery with Sun-Powered Gadgets You Can Build Yourself 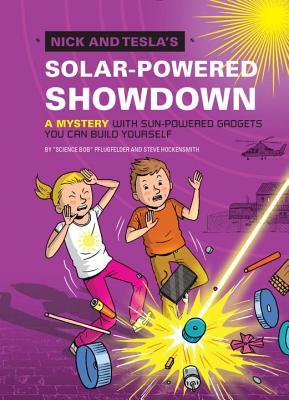 I’m sure by now you know how much love I have for the Nick and Tesla series right? Nick and Tesla’s Solar-Powered Showdown: A Mystery with Sun-Powered Gadgets You Can Build Yourself is the latest in the series!

uper-smart kid inventors Nick and Tesla Holt have outsmarted crooks, spies, and kidnappers, but now it’s time to crack their biggest mystery yet: where the heck are their parents? With the help of their eccentric Uncle Newt, the twins trace the clues to their missing Mom and Dad, scientists working on solar-power research for a clandestine government project. They’ll need all their wits, along with an assortment of homemade gadgets, to outsmart the criminal mastermind who’s trying to turn solar power into a secret weapon. Featuring instructions for building and using five awesome solar-powered contraptions—a hot dog cooker, alarm bell, listening device, model car, and nighttime LED signal cannon

Twins Nikola Copernicus Holt and his sister Tesla Nightingale Holt have been on so many fun adventures I can’t wait to see kind of fun they get into next. This time, their parents are missing, woooot!! But you know what I love most of all about this series? Science projects every few chapters. So you’ll never be at a loss for something to do or for that dreaded science fair.