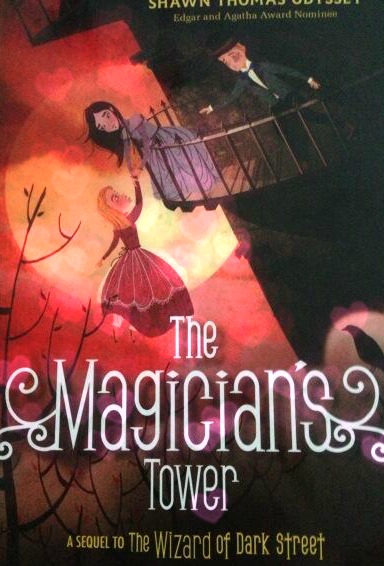 There are so many good middle grade books on the market it’s a shame that there aren’t more hours in the day to get to read them!Â  Here’s a book that I think is worth a look: The Magician’s Tower, the sequel to The Wizard of Dark Street.

I know what you’re thinking: you can’t pick up the sequel without reading the first title first.Â  It’s true, you shouldn’t but then again, that’s what makes us so unconventional, doesn’t it?

I like The Magician’s Tower because it reminds me of The Night Circus, only for tweens!Â  There are wizards, magicians, faeries, dark streets, a competition, a love interest, gypsies, spells, and adventure.Â  What’s not to love?

Despite her extraordinary magical abilities and sleuthing skills, Oona Crateâ€™s detective agency has failed to take off. But a new challenge captures her attentionâ€”The Magicianâ€™s Tower Contest.

Held every five years, no one has ever completed the array of dangerous tasks (such as racing on flying carpets or defeating a horde of angry apes). As the competition commences, a case emerges. A rare punchbowlâ€”one with unparalleled magical powersâ€”has disappeared from the carnival surrounding the Magicianâ€™s Tower. If Oona can find the culprit, she could use the bowl to answer her question about her motherâ€™s and sisterâ€™s tragic deaths so many years agoâ€”was she really at fault?

Full of magic, mystery, and fun, THE MAGICIANâ€™S TOWER continues the wonderful adventures of Oona Crate.

And who doesn’t love a strong female protagonist with a raven for a pet?

Check out the fun stuff happening at the author’s website and take a quiz to see which characterÂ  you are most like; I did! While you’re there, you’ll find other fun things. Check it out. If you dare ahahahahahaha! (I crack myself up)