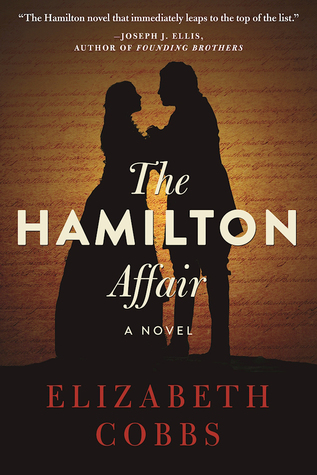 I’m going on a late summer vacation shortly and choosing and packing books is always a chore. I want to TAKE ALL THE BOOKS!! But alas, one must pack more than one outfit for sanitary reasons and books take up so much room. Given these burdens of space I take my book packing duties very seriously.  Here’s one I’m thinking about taking:

I’m super excited about this book mainly because, I hear the musical is so dang fantastic. What’s the next best thing to seeing a musical? Yeppers, reading a book. Now if I could only get Lin Manuel Miranda to narrate it for me. But, Mr. Pam might not give up his seat on the plane, so I guess I’ll just hafta suffer and read it myself. No matter, I’m a fan of historical fiction and I insist on taking a romance to the beach. That’s what beaches are for, right?

Set against the dramatic backdrop of the American Revolution, and featuring a cast of iconic characters such as George Washington, Thomas Jefferson, and the Marquis de Lafayette, The Hamilton Affair tells the sweeping, tumultuous, true love story of Alexander Hamilton and Elizabeth Schuyler, from tremulous beginning to bittersweet ending—his at a dueling ground on the shores of the Hudson River, hers more than half a century later after a brave, successful life.

I’m kinda digging the idea of his beloved Elizabeth Schuyler beginning an orphanage too. I think I’ll carry this book on so that I can pack more in my suitcase. Wait a minute, my husband is bringing a suitcase too!

40% off new school styles at Gymboree