I’m a big fan of the Ford 99 test.  What is it? Open your book to page 99.  Look at the first line of that page; this is the page the author discusses.  I thought this would be an interesting way to get inside the mind of the author. My review of the book is here.

Page 99 of Freshman starts with the line

you!” I’m not in the mood for threats from a nine-year-old, thank you very much. 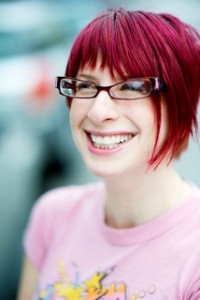 Hmmmm, I wonder what the author was thinking when writing this text?  Let’s find out from Meredith Zeitlin herself!

Ah, the aftermath of the Great Friend Betrayal. It’s this huge jumble of feelings for Kelsey – fury, self-loathing, confusion… but the overall mood is general suckage. I mean, she got hit with a double-edged sword, right? Losing not only her crush… but discovering it’s at the hands of one of her besties!? SO. NOT. OKAY.

Then, she gets a night of troubled sleep, throughout which she’s clinging to the 1% shot that the whole thing will have turned out to be a dream… and she gets blasted out of that unreality by her sister, of all people. An individual for whom the world’s biggest problem is that there isn’t a “That’s So Raven” marathon on TV that day. Like Kelsey needs to see her at this moment?!

Then she’s awake and has to deal with the truth. Again. She can’t stop thinking about it. She wants to… but she CAN’T. It’s like if you stub your toe. You want it to not hurt any more, but you have to keep touching the spot to check and see if it still hurts. Yep – it does. And… Repeat.

So Kelsey shifts gears into the very popular “let’s try and think about this logically so I don’t have to feel my feelings!” mode. Working it out. Asking the important questions. Willing it not to be true. Kelsey does a lot of brain-sifting throughout the book. She usually ends up right back where she started – her feelings – but she never stops trying to rationalize her way out of them.

So, first things first: Jordan doesn’t like her. Skip over “Why the hell not?!” and go straight to “Whose fault is this!?” Lexi makes sense, right? Kelsey could deal with being skipped over for a super-model type. Her brain can process that. But Cassidy… is normal. Just like her. Which means… ipso facto, Kelsey must ACTUALLY be subpar! And subpar compared to a girl who has ALL THESE FLAWS!? How can that be true!??!?!

And that’s the end of the page. Kelsey has, like, three more pages of rationalizing, but I’m not allowed to talk about that here. (Blame Pam, you guys. She picked this topic. I wanted to do the “Ford 99-115” test, but she yelled at me and I was afraid.)

Here’s some top-secret insider info, though – Cassidy’s list of flaws was originally different. But my editor thought it was “too mean.” The publisher didn’t want anyone to think Kelsey was mean, ever. I thought that was pretty silly, since people are, in fact, mean sometimes. Especially when they are sad, or hurt, or furious. These thoughts were just in Kelsey’s head – she didn’t email them to the whole school (now THAT would’ve been mean)! But I picked my battles in the editing process, as one must – so I changed it.

Then there’s poor Keith, who Kelsey totally used to get back at Jordan (who didn’t know he was even involved, of course). She knows she didn’t treat Keith very fairly, but she can’t process that part yet.  Sometimes other people’s feelings have to fall by the wayside when your own are hurt. I don’t think Keith was originally mentioned in this scene, but I had to throw him in so Kelsey wouldn’t seem mean. (See above.)

And that’s it. Did I pass the Ford 99 test?!?! I hope so. And I hope you’ll all go read the other 281 pages to find out what happens to ol’ Kelsey. It does get better for our girl… but not before it gets much, much worse. Happy reading!

Isn’t that just like a young teenage girl: ignoring someone else’s feelings because all she can think about is her own? Thanks MZ!

So friends, that’s Meredith Zeitlin.  To be sure, I didn’t yell at her. I may have strenuously suggested she follow my suggestions. It’s all perspective.

I’m very happy with the insight I’ve gained from this exercise, aren’t you? It’s just as I pictured in my brain.  I am glad that Kelsey was not allowed to be mean outside of her head.  She’s a good kid and her perspective is refreshingly normal.  I’m a little tired of the whole mean girl phenomenon.

If you wanna be Zeitlin’s bestie like me, follow her on Twitter @zeitlingeist, she’s really funny!  Additional information about Zeitlin’s book can be found at KelseyFinkelstein.com, do check it out.

Also, Go. Read. the. Book. If you have a teenage girl, like I do, you’ll laugh and squirm in your seat. How fun is that?