I want to revisit this title. Again. The story is so good and the movie was so…not.  Anyway, I now see teens buying this book so I’m guessing classrooms have realized how important this work is.  As always, book is BETTER. 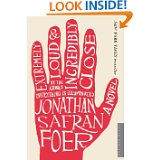 “What about a teakettle? What if the spot opened and closed when the steam came out, so it would become a mouth, and it could whistle pretty melodies, or do Shakespeare, or just crack up with me? “

To be sure, Safran Foer’s new novel, Extremely Loud & Incredibly Close, is as interesting as his debut novel, Everything is Illuminated.  Extremely Loud & Incredibly Close revolves around 9 year old Oskar Schell, his family, and his father’s death after the Sept 11th events.  Do not be deceived: the story is neither for children (although possibly YA) nor a drab account of the terror attack.

Individual family members suffer with what appears to be post traumatic stress disorder through generations of terrorism and war.  Given his background, it is little wonder that Oskar suffers from anxiety as he copes with and searches for answers to his father’s death.  Safran’s story is imaginative in its presentation, providing photographs and other graphic representations: several pages are empty like pages in a blank book.  The book is clever enough to be different from every other novel, yet at times just a little too clever.

In the end I am satisfied with the author’s ending and the resolution of the character’s situations.  Multiculturally, the main characters are Jewish and while not openly practicing, appeals to my need for ethnic diversity.

I give this story of a precocious child 3 paws!

“I could invent a teakettle that reads in Dad’s voice, so I could fall asleep, or maybe a set of kettles that sings the chorus of “Yellow Submarine,” which is a song by the Beatles, who I love, because entomology is one of my raisons d’etre, which is a French expression that I know.”