Chat with Andrew McCarthy and The Longest Way Home

Andrew McCarthy, the quiet heartthrob from the 80s movie fame, has written a new book entitled The Longest Way Home: One Man’s Quest for The Courage to Settle Down. 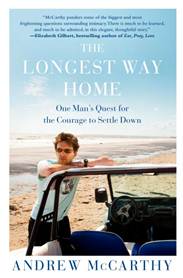 Here’s what they’re saying about it:

In THE LONGEST WAY HOME: One Man’s Quest for the Courage to Settle Down (Free Press; September 18, 2012; $26.00), actor and award-winning travel writer Andrew McCarthy offers a revealing and insightful memoir about how travel allowed him to overcome his life-long fears in order to become the man, father, and husband he knew he could be.

When in his forties Andrew finds himself at a crossroads, realizing that something in his character has always kept him at a distance, preventing him from giving himself wholeheartedly to the woman he loves and from becoming the father that he knows his children deserve, he turns to travel to find clarity and liberate him from these fears. In THE LONGEST WAY HOME, Andrew sets out on a series of seven exotic trips — from the treacherous slopes of Mt. Kilimanjaro, to the dense Costa Rican rainforests, to a riverboat on the Amazon — in search of answers.

According to Andrew, “travel — especially by people who rarely do it — is often dismissed as a luxury and an indulgence,” or as a way to escape life’s pressures. For Andrew, however, travel is a way for him to confront his fears and worries directly. “For me,” he explains, “travel has rarely been about escape; it’s often not even about a particular destination. The motivation is to go—to meet life, and myself, head-on along the road. There’s something in the act of setting out that renews me, that fills me with a feeling of possibility. On the road, I’m forced to rely on instinct and intuition, on the kindness of strangers, in ways that illuminate who I am, ways that shed light on my motivations, my fears.”

Set amid some of the world’s most evocative and exotic locales, Andrew’s real journey is one of the spirit. Honest and authentic, Andrew McCarthy’s THE LONGEST WAY HOME emerges as an intimate memoir of self-discovery and a remarkable love song to the woman who is now his wife.

I thought so too and I’m happy to be participating in a…PARTY! Just me and Drew (and maybe 4,000 other people, but whatevs) a CHAT on Friday September 14th at 6pm EST.  I’m sure he’s been traveling the world looking for me, an Unconventional Librarian, but since I’m already spoken for he’ll just hafta settle for a chat.  Maybe now he can finally settle down.