Book Review: Sound of the Heart by Genevieve Graham

Dougal was no stranger to the voices of the dying.Â  He was a warrior, born and trained to kill.Â  Death was simply part of his life.Â  In the heat of battle, blood roared so ferociously through his head, he barely heard the sounds of men drawing their last breath. 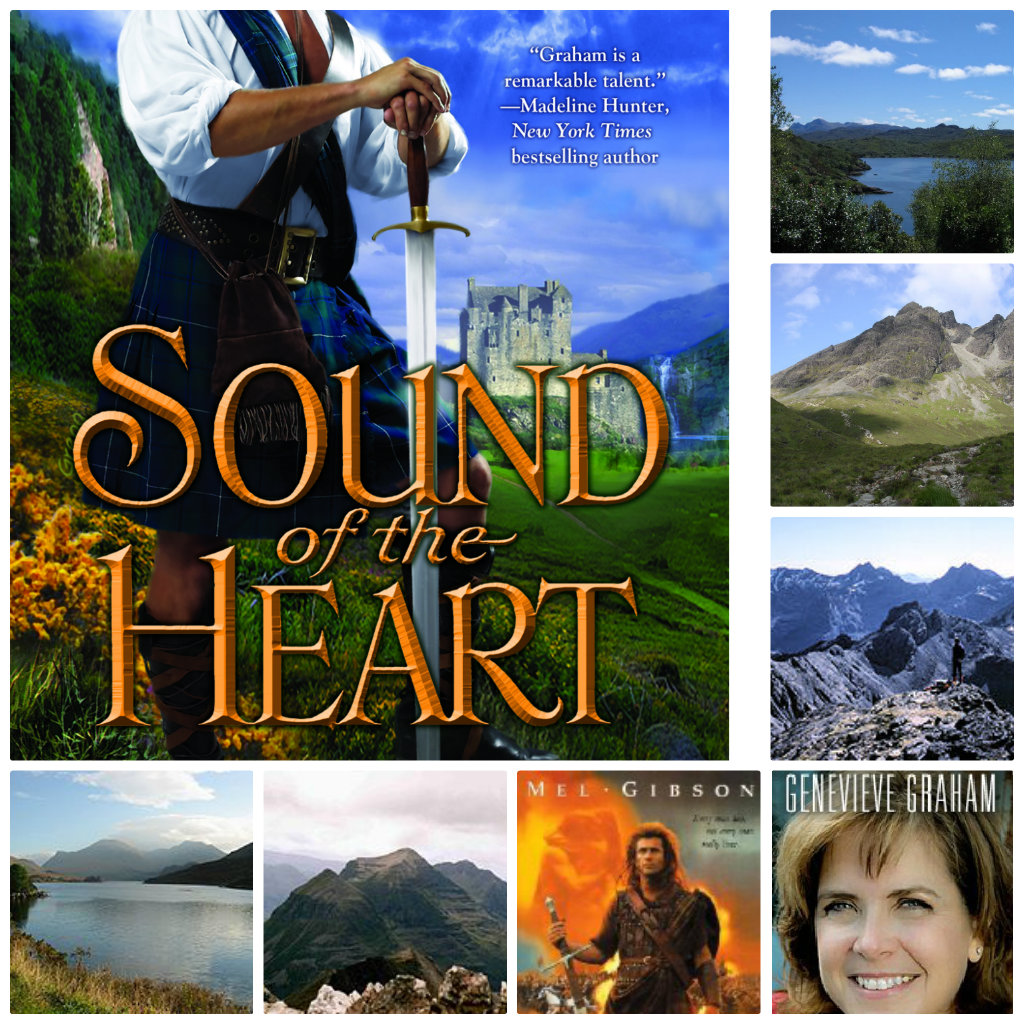 Imagine the Scottish Highlands, big brawny men in kilts, thick Scottish brogues, and action. Sounds like a big budget Mel Gibson movie, doesn’t it?Â  Well, Genevieve Graham’s latest book, Sound of the Heart, just might be.Set in the mid 1700s, Sound of the Heart is Graham’s companion novel to Under the Same Sky.Â  From the first page to the last, the reader is drawn into the engaging, fast paced action of the war between the Scots and the English.Â  The story revolves around the main character, Dougal MacDonnell, a fearless Scottish warrior.Â  Dougal is the consummate hero:Â  mortally wounded several times but recovers, good friend, fierce warrior, andÂ  gentle lover.

SOTH takes the reader through a historical journey from the breathtakingly beautiful Scottish Highlands to the rotten, stinking streets of London, to the new colonies of America.Â  During the action you’ll come to love the characters and feel their joys, their losses and their love.Â  I don’t want be a spoiler but I could keep chatting about the plot twists for days (or paragraphs)!

Genevieve Graham,Â graduated from the University of Toronto in 1986 with a Bachelor of Music in Performance (playing the oboe). While on a ski vacation in Alberta, she met her future husband in a chairlift lineup and subsequently moved to Calgary to be with him. They have recently settled in a small, peaceful town in Nova Scotia with their two beautiful daughters. Writing became an essential part of Genevieveâ€™s life a few years ago, when she began to writeÂ  her debut novel, Under the Same Sky.

You can find out more about Genevieve Graham at her website or connect with her on Twitter @GenGrahamAuthor !

But WAIT!!! There’s More! I had the pleasure of convincing Graham to participate in the Ford 99 Test of Sound of the Heart. Remember how to play to the Ford 99 Test? Open your book to page 99, read the first line of text and then drill down the ideas or topic on that page: insight into the author’s brain! Here’s what Genevieve had to say:

Â First, I have to thank Pam for asking me to do this. I had absolutely no idea what the Ford 99 test was when she asked me, so I had to look it up. What a strange concept! To pluck one page from a book and take it apart, see if it works for the reader. I am now going to have to go through every one of the books on my tbr pile and check them out! Iâ€™m also going to have to be sure that next time I write something, page 99 is absolutely awesome.

Okay. â€œSound of the Heartâ€. You pick up the book after admiring the regal stance of the (of course) incredibly masculine Highlander on the cover, taking in the stormy sky, the castle in the background â€¦ â€œOoh!â€ you might say. â€œI love these sexy Highlander stories.â€

Sadly, you are about to find out that while Dougal MacDonnell certainly is sexy, and heâ€™s unquestionably a Highlander, this is not one of â€œthoseâ€ stories. And while page 99 of â€œSound of the Heartâ€ doesnâ€™t jump right up at the reader and scream â€œThis is not a bodice-ripper!â€ it does suggest thereâ€™s a bit more depth to it than you might expect.

The page opens with two men conversing in a fairly heavy Scottish brogue about a journey, discussing the need to travel out of the land of â€œsassenachsâ€, away from a â€œfortâ€ that makes them nervous, and up to the Highlands. At the time of their conversation they are being jostled about in the midst of the noisy squalor of London. The two are short on funds, so the younger of the two, Aidan, climbs onto a chair in a tavern and sings for their supper. He still has the unchanged, intoxicating voice of a boy, and the elder traveler, Dougal, sits back to enjoy the entertainment. He has apparently been traveling a while with this boy, and is sorry that someday Aidanâ€™s beautiful voice will be replaced by a manâ€™s lower timbre, but for now he is content to listen and collect coins from the audience in the tavern. When Aidan is done and their bellies are full, he is quick to ask Dougal to read to him from a book heâ€™d been carrying around all day.

So there is no talk of romance, of a womanâ€™s physical charms, of wrestling with a wench later on. There is only the companionship of two travelers doing what they must to get home.

Does this sum up the book? Not in the least. But it does talk of the voyage and hint at a past they are trying to outrun. It speaks of a close friendship in dangerous times. Does it make you want to pick up the book and buy it? Well, thatâ€™s up to you.

Thanks for having me here today, Pam!

You know what? I completely forgot to hit on the important point Gen (my personal nickname for her that she heretofore knows nothing about), touched on: this book is NOT your typical historical romance! To be sure, there is some romance there, but it feels more like an action flick, and who doesn’t love action?

But wait, there’s STILL more! How can i be, you ask?? The awesome author is hosting a giveaway you do not want to miss out on! Here are the deets:

A signed copy ofÂ Sound of the HeartÂ PLUS a four cd set of relaxation cds created by my incredibly talented musical friends,Â Cori Ashley and Ed Franks. I’ll give you a little insight into why I chose these cds as my prize – I’m NOT sayingÂ Sound of the HeartÂ is about relaxing â€¦ considering the wild adventures Dougal’s in for, I doubt he was too relaxed! But Dougal has a gift, similar to his brother’s gift. He can relax his mind and hear the thoughts of other men, but he can also sink into his thoughts and hear the sounds and voices of his loved ones as if they were right there with him. These cds were created to help you escape the stress and craziness of your days. Grab a cup of tea or glass of wine (your preference!), light a candle, maybe slip in to a bubblebath, and listen to the sound of your heart.