Get to Know my #atozchallenge Bookish Friends. Introducing Tim!

You know PammyPam likes to make new friends and also to learn about new books! I’ve invited my friends from the Blogging from A to Z Challenge to come over and chat about a book they love. Remember when Arlee joined us last Friday? Well today, his challenge team member Brave Sir Tim joins us to discuss his fave book.  And it’s not My Little Pony.

It is really hard to pick a favorite book.  There are so many good ones out there and so many that I love to read and reread, but one of my favorites is “Dracula” by Bram Stoker.

I love horror and gothic horror in particular, and Dracula is one of the best.  Published in 1897 Dracula says quite a bit about our history and fears as the world was changing.   England at this time was the World’s greatest power, the sun literally never set on the British flag.  Science, technology and sweeping industrialization was changing the face of the world. Sometimes these changes were at the cost of the lands of the British Empire stretched out too.  Your common Englishman was of the time feared and was enthralled with these lands at the same time.  Old world vs. New World.  Superstition, religion and magic vs. science, technology and industrialization.   These are themes of Dracula.

Dracula represents the Old World while our heroes, especially Mina, represent the modern age.  Van Helsing is a man of Science, Mina is a forward thinking woman that uses the latest “technology”, in this case the typewriter, Harker even represents the industrial spirit.  All gather to fight this evil using the technology at their disposal.

Additionally Dracula works as an allegory of unrepressed sexual desire.  Dracula is the ultimate sexual predator in a time when sexual mores and sexual practice could not have been more disparate.  Dracula preys on the women of the story, notably Lucy (who represents the old world woman)  and Mina (the new world woman).  His sexual prowess infects others like the scourge of the day, syphilis.  Dracula is no love story, it is about horror, fear and desires turned dark and evil.

This is all the background to a classic “Penny Dreadful”, the hunting of an evil monster who preys on the young and innocent.   It might not be everyone’s cup of tea, but I enjoy it.

Thanks Brave Sir Tim. While I’m not a big fan of scary stuff, I’ve never quite understood the sensuality of Dracula. I mean, he bites your neck and you die, how sexy is that?I do, however, get the whole changing world and whatnot and our darkest fears.  My fears, however, are running out of cake.  My fave vamp? 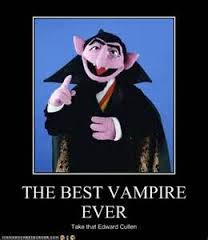 The Count! One piece of cake, ah ha ha ha!

It was great getting to know you Brave Sir Tim! Check him out at The Other Side, http://timbrannan.blogspot.com/