It’s always a good day when I get to read a middle grade book and then talk to the kids about it.  Today I’m chatting about Scumble by Ingrid Law. 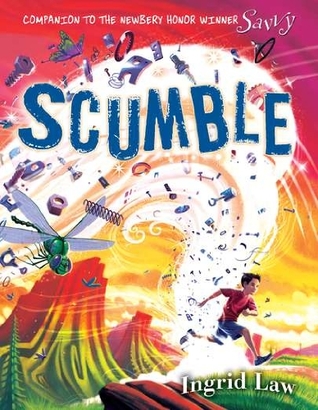 Scumble is the companion book to the Newbery Honor winning title Savvy:

For generations, the Beaumont family has harbored a magical secret. They each possess a “savvy” -a special supernatural power that strikes when they turn thirteen. Grandpa Bomba moves mountains, her older brothers create hurricanes and spark electricity . . . and now it’s the eve of Mibs’s big day.

As if waiting weren’t hard enough, the family gets scary news two days before Mibs’s birthday: Poppa has been in a terrible accident. Mibs develops the singular mission to get to the hospital and prove that her new power can save her dad. So she sneaks onto a salesman’s bus . . . only to find the bus heading in the opposite direction. Suddenly Mibs finds herself on an unforgettable odyssey that will force her to make sense of growing up-and of other people, who might also have a few secrets hidden just beneath the skin. 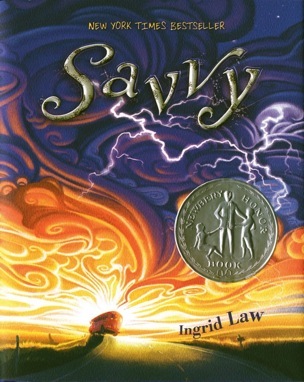 it’s safe to head to Wyoming for a family wedding, where it’s soon revealed that Ledge’s savvy is much more powerful than anyone thought. Worse, his savvy disaster has an outside witness: Sarah Jane Cabot, reporter wannabe and daughter of a local business man. Just like that, Ledge’s beloved normal life is over. Now, he has to keep Sarah from turning family secrets into headlines, stop her father from foreclosing on Uncle Autry’s ranch, and scumble his savvy into control so that, someday, he can go home.

So, you’ll hafta read the book to find out whether Ledge can learn to scumble his savvy, cuz I’m NOT going to tell you.

I’m pretty sure mine is reading.