I’m reposting this because even though we haven’t had much of a winter this year, it is still fun to read about winter.

It’s winter and soon we’ll be covered in snow day to day and kids love winter activities!  After playing in the snow, curl up with a cup of hot cocoa and a blanket and  read these to your little one:

The Snow Ball by  David Steinberg 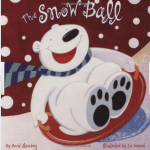 I always lean toward books with animals when searching for resources for little ones;

the character depicted is not of the same color.

Here’s a peek inside the book:

“Bears go flopping on the ice for a ride,

Next skit-skat-skadoodle up to icicle Hall

Where little bears gather for a Snow Day ball!”

Another fun reading choice for a post sledding activity is 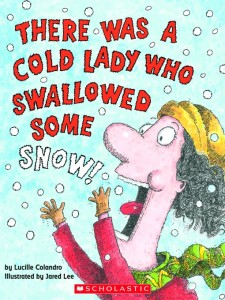 “There was a cold lady who swallowed some snow.

I don’t know why she swallowed some snow.

Since the rhyme is familiar, children will easily be able to help read along.

I wish this series did a better job depicting people of other colors, however,

It’s funny and gross at the same time, which kids love!

I give these two books for the younger set 3 paws.