that your tree will love. 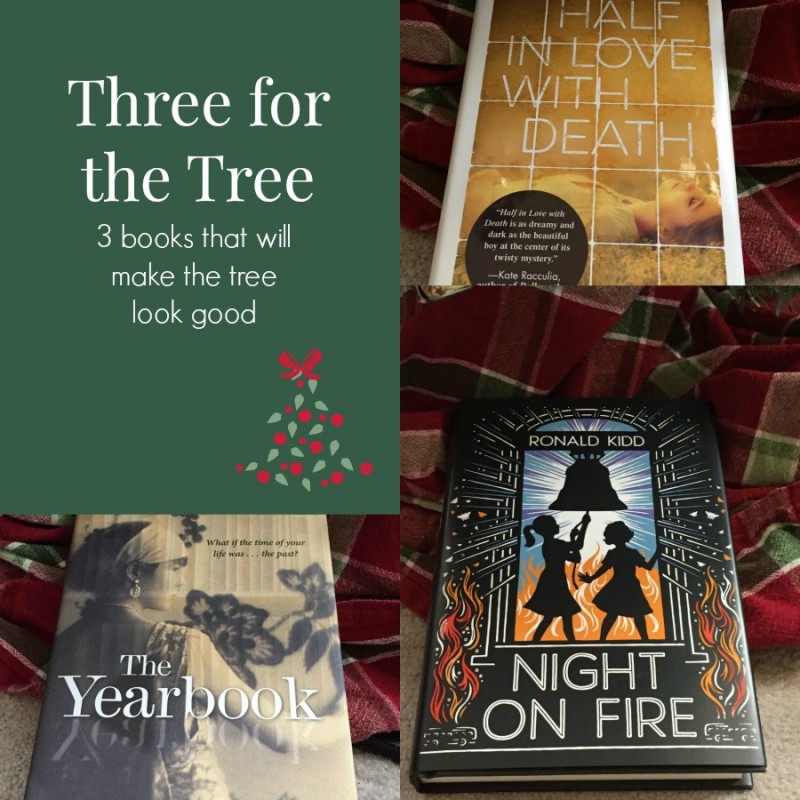 The Yearbook by Carol Masciola

Misfit teen Lola Lundy falls asleep in a storage room in her high school library and wakes up to find herself 80 years in the past. The Fall Frolic dance is going full blast in the gym, and there she makes an instant connection with the brainy and provocative Peter Hemmings, class of ’24. His face is familiar, and she realizes she’s seen his senior portrait in a ragged old yearbook in the storage room. By the end of the dance, Lola begins to see a way out of her disastrous Twenty First Century life: She’ll make a new future for herself in the past. But major mental illness lies in Lola’s family background. Has she slipped through a crack in time, or into an elaborate, romantic hallucination based on the contents of an old yearbook?

Who doesn’t love old yearbooks? Time Travel? Count me in!

Half in Love with Death by Emily Ross

It’s the era of peace and love in the 1960s, but nothing is peaceful in Caroline’s life. Since her beautiful older sister disappeared, fifteen-year-old Caroline might as well have disappeared too. She’s invisible to her parents, who can’t stop blaming each other. The police keep following up on leads even Caroline knows are foolish. The only one who seems to care about her is Tony, her sister’s older boyfriend, who soothes Caroline’s desperate heart every time he turns his magical blue eyes on her.

Tony is convinced that the answer to Jess’s disappearance is in California, the land of endless summer, among the runaways and flower children. Come with me, Tony says to Caroline, and we’ll find her together. Tony is so loving, and all he cares about is bringing Jess home. And so Caroline follows, and closes a door behind her that may never open again.

Inspired by a true story. Thriller = Must Read

Night on Fire by Ronald Kidd

Thirteen-year-old Billie Simms doesn’t think her hometown of Anniston, Alabama, should be segregated, but few of the town’s residents share her opinion. As equality spreads across the country and the Civil Rights Movement gathers momentum, Billie can’t help but feel stuck–and helpless–in a stubborn town too set in its ways to realize that the world is passing it by. So when Billie learns that the Freedom Riders, a group of peace activists riding interstate buses to protest segregation, will be traveling through Anniston on their way to Montgomery, she thinks that maybe change is finally coming and her quiet little town will shed itself of its antiquated views. But what starts as a series of angry grumbles soon turns to brutality as Anniston residents show just how deep their racism runs. The Freedom Riders will resume their ride to Montgomery, and Billie is now faced with a choice: stand idly by in silence or take a stand for what she believes in. Through her own decisions and actions and a few unlikely friendships, Billie is about to come to grips with the deep-seated prejudice of those she once thought she knew, and with her own inherent racism that she didn’t even know she had.