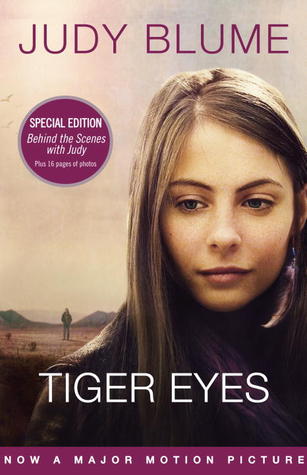 A while back I received a copy of Tiger Eyes, signed by Judy Blume HERSELF! I Danced and cried in the bookstore as my co-worker/friend looked on. I think that was the response she had expected. If you’re like most women who grew up in the 80s (90s too?) Judy Blume spoke to your  (tween) teenage soul. From the classic Are You There God, It’s Me, Margaret? To the racier Forever, Judy was a staple on my bookshelf.

So it was with great joy that I finally picked up the personalized copy of Tiger Eyes and dug in for a re-read. Do you re-read? I love a good re-read. More on that another time. Do you know what I discovered? 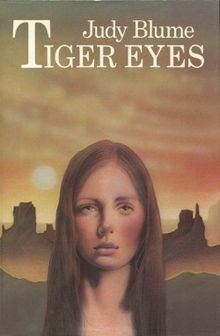 I had not previously read Tiger Eyes! To be sure, I was a tween when I had read many of Blume’s books and as you grow up your tastes change. So it wasn’t until I finished this book that I realized I hadn’t read it! The book was originally published in 1981, so I probably was just entering high school and had moved on to more difficult books.

This is the original book cover. Dated, right?

But here’s what I discovered about myself and Judy. Judy wrote books for teen (or tween) girls that contained real issues. And back in the day, there weren’t too many books for girls outside of  Anne of Green Gables or Little House on the Prairie. And Blume’s books discussed issues that girls were often confronting.

Another great bit about Blume is that reading her is easy. It’s not super complicated or high brow, which I like because it’s inclusive; kids who don’t consider themselves good readers can read and understand the book. Judy is the Common Girls’ author. It’s difficult to believe but back in the day books did not discuss the issues that are becoming more and more common in YA literature: rape culture, death, drug use, etc. These topics were avoided. That is why some of Blume’s titles were challenged.

So briefly, here’s my two cents on Tiger Eyes: this is for young teens or tweens, probably 11 or 12 years old. Davey’s father is shot in a robbery and the family experiences emotional breakdowns in the aftermath of his death. There is typical teen behavior: drinking, language, and sexual content (although back then I think it was called “heavy petting”?). I smiled through the whole, very quick read. It was like I was 12 again, without all the hassle of middle school. It made me feel good.

Would I recommend this to a young reader today? Totally. Every reader needs a little Judy Blume in their life.

I have half a mind (Hey shut up!) to go back and read Fudge a mania and Tales of a Fourth Grade Nothing. Although I did have the pleasure of sharing these titles with my own littles.

In case you’re wondering, I would consider Tiger Eyes mildly diverse. While the main character is White, she does suffer significant trauma in the death of her father, and there is a handsome young man of Native American descent. What’s extremely telling about this book is that Davey is from Atlantic City and when they move to New Mexico she discovers how racist her new friends are, something she hadn’t experienced in a very diverse New Jersey.

See? Even back then Judy Blume knew what was up!