The Threat Below by Jason Latshaw 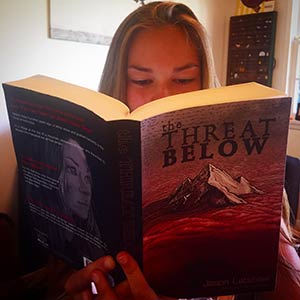 Humanity is a memory. She must find out why.

300 years ago something terrible arose and slaughtered mankind. Now 17 year-old Icelyn must confront this centuries old horror in this new YA novel that’s been hailed as a “compelling and unpredictable dystopia” with a storyline so “new and original” that “it’ll blow you away.” Book 1 in an eventual 4 part series, this has been called “a whole-hearted effort to write a really entertaining novel with a lot of substance, and it delivers.”

I don’t see a whole lot of recycled elements here, which is a good thing. There are weighty themes, some pretty heavy philosophy, but at the same time those deeper pieces are counter-balanced by a breakneck-paced plot and mystery for those who don’t care about such things, and instead just want to know what the heck the darn monster is all about. (A mystery whose solution is surprisingly satisfying and integrated, but more on that in a bit.)

There’s a lot to like whether you’re a young adult or a… not so young adult. And the ending delivers, evading the temptation to string the reader along with an annoying cliffhanger, and instead rewarding those who have put the time in â€“ while setting up what will certainly be intriguing future stories.

Last note: there’s a pretty big twist a little more than midway through that really puts this story in a category of its own. It has to do with the nature of the monsters, and their history with humanity. Don’t let anyone spoil it for you! I really appreciated it, and can’t wait to see how it’s developed in future installments.