The Girl with the Dragon Tattoo – My Thoughts

I don’t normally do this sort of review but I have so many thoughts on this I needed to share. 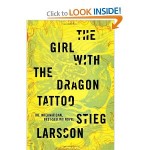 If you have a jaded view of the world and believe that most people are inherently evil and the world is full of misogynistic child abusers then The Girl with the Dragon Tattoo is a must see movie.  I read the book several years ago while on vacation in Aruba.  To be sure, this is not a vacation read.  I was disgusted and angry but invested in the characters so I could not put the book down (in my mind that is what makes a successful read).  When I finished reading the book I vowed that I would never read another one of Stieg Larssons’ books.  I gave the book away with a caveat about how violently misogynistic it was.  When I discovered the author died I understood: anyone who has this much vile garbage inside of them was not a healthy individual.

When the movie came out, however, I was intrigued.  NPR’s “Fresh Air with Terry Gross” gave it a good review and my interest piqued.  The trailer looked interesting and the more reviews I read the more I needed to know.  I battled with my psyche because I knew the violence would upset me and I was afraid I’d walk out of the movie, something I’ve only done once or twice (The cook, the something and her lover).

So.  There are no spoilers in this review, however, be advised that if you have not read the book, you may be disgusted on many many levels.  James Bond’s Daniel Craig is not very believable as a middle aged journalist (except the middle aged part) but Rooney Mara is exceptional. Her accent sounds spot on and she embodies the character that I envisioned in my head while reading the book.  Craig’s accent, not so much.  He is pretty, though.  The movie is long and at least one storyline was not followed through and was kind of muddled, but since the movie was already over 2 hours, you can understand why.  They could have eliminated a sex scene or two to allow for storyline completion.

The movie holds true to the spirit of the book. Thanks to Hollywood, the violence is not as bad as in the book (as I remember), but it is still unnecessarily graphic.  Yes there is sex in the movie and while it’s not gratuitous, the violence is.  If you do not like violence then this is not a movie you will enjoy.  It is violent against women, children, Jewish people, and animals.  It certainly makes Swedish people look bad, but then again, if you believe all people are inherently evil then you are not surprised.

Did I mention that the movie seemed to be marketed to a younger set, with the loud screaming music and the slick opening credits, but the theater was full of middle aged people like me?  What’s that about?

I feel like I need a trepanning to empty the visuals from the movie out of my head so I can rest. Maybe a cuppa coffee will help.

Have you seen it? What are your thoughts?

Out and Equal in the Workplace