The Feminism of Twilight 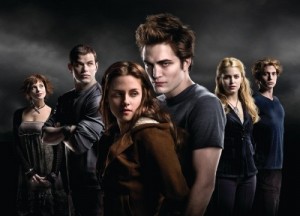 I seem to have a lot of thoughts about Twilight lately. And the funny thing is, my 13 yr old, die hard Twilight fan of a daughter is seeing things similarly. I posted the other day about the lack of ethnicity and then I enjoyed a conversation about it with my kids. During some rare family time, we all sat down and watched New Moon together. This, after Pumpkin announced that she didnâ€™t like the third Twilight movie as much as she thought (sheâ€™d just recently seen it a second time). I do not hide my feelings about womenâ€™s rights (or anyoneâ€™s rights for that matter) from my children, but I think itâ€™s important that the kids make up their own minds. But even without my guidance, Pumpkin discovered that Bella is too attached to having a man in her life.
Given that frame of mind, we re-watched New Moon and enjoyed ourselves as we pointed out Bellaâ€™s lack of feminism or self worth during the movie. Not only does Bella need a man to make her life complete, she needs a â€œsuperâ€ man of sorts; an all powerful superhuman type of guy. Here are Bellaâ€™s other needs and faults as we saw them.
â€¢ Bella is very clumsy. VERY clumsy. Always needing to be rescued.
â€¢ She lets both men in her life drive her car. Chauvinism much?
â€¢ Edward tosses her around a lot; tossing her across a room to escape being bitten, tossing her over his shoulders so they can climb trees, or tossing her away when he thinks they shouldnâ€™t date anymore.
â€¢ Jacob also carries Bella around a lot, almost always shirtless. Whatâ€™s that about?
â€¢ Bella is an adrenaline junkie: in New Moon sheâ€™s constantly setting herself up to get hurt, and in Eclipse, she cuts herself on purpose.
â€¢ Both guys in her life tell her to go away and that they donâ€™t want her. But she wonâ€™t believe it.
â€¢ Bella leads Jacob on. Sheâ€™s a close talker and EVERY conversation they have is close up. No wonder the poor boy always tries to kiss her. She is sending him mixed messages!
â€¢ She feels like sheâ€™s Mother Earth and needs to protect her boyfriends. Soâ€¦sheâ€™s all powerful but yet not worthy of anyoneâ€™s love.
â€¢ And most importantly, she is willing to die for the love of her life. Why do kids always want to die to prove their love for someone?
I canâ€™t discuss this series without talking about the lack of parenting in this series. I understand that young adult literature usually has parents who are in the background of sorts and thatâ€™s OK. But in this story, it doesnâ€™t quite make sense. First of all, the Mom gets remarried first and lets the daughter go and live with the Dad? Who ever heard of such nonsense? And the Dad stays a bachelor forever? Thatâ€™s kinda odd too. It is the men who usually remarry first. Ok so Charlie is still holding out for Bellaâ€™s mom. He needs help. Or to move on. And Charlie, you let Bella sit and mope for months after Edward leaves?? Bad Dad, Bad. Give her a week or something and then talk to her. But no, you let her suffer all fall and winter. Dude, sheâ€™s having nightmares and doesnâ€™t eat. She needs some help. Get her some counseling or some Prozac. And how come the mother is no where in the movie? If the daughter is that out of it, the mom should be right there offering her support. Momâ€™s understand about heartbreak. Itâ€™s what we do.

What are you thoughts on the series? Agree or not?