You know I’m all about books with pirates, right? Good or bad, ugly or princess, if there’s a pirate in it, I want to read it!

You also know that I love a good opening line in a book. It sets the tone and if done accurately opens up a world of wonder.  Here’s the first line of The Map to Everywhere:

Fin crouched behind a rack of bootleg flavors, trying hard to ignore the taste of rat fu and broccoli juice seeping from the grungy bottles.

Love it! Makes me want to barf and run away at the same time.  But it also lets you know that the author(s) have some good stuff in store for you. 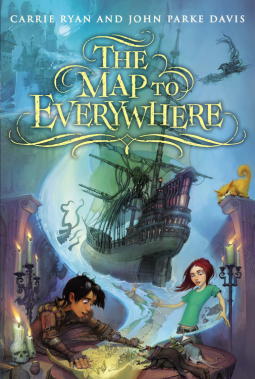 To Master Thief Fin, an orphan from the murky pirate world of the Khaznot Quay, the Map is the key to finding his mother. To suburban schoolgirl Marrill, it’s her only way home after getting stranded on the Pirate Stream, the magical waterway that connects every world in creation. With the help of a bumbling wizard and his crew, they must scour the many worlds of the Pirate Stream to gather the pieces of the Map to Everywhere–but they aren’t the only ones looking. A sinister figure is hot on their tail, and if they can’t beat his ghostly ship to find the Map, it could mean the destruction of everything they hold dear!

I have a sneaky suspicion this will be a series and we’re going to find out what other trouble Fin and friends can get into.  Think Harry Potter and Pirates of the Caribbean meet something; Oliver Twist maybe?

I dunno but I can’t wait for the next book. Sign me up, matey! 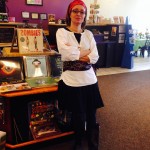