I bet you thought I didn’t have a book for football, did you?

Well you’re right. I don’t have a book for you.

I have SEVERAL books for you about football; just in time for SUPERBOWL SUNDAY!

While the pregame festivities are underway, grab a book and celebrate these football books for everyone. 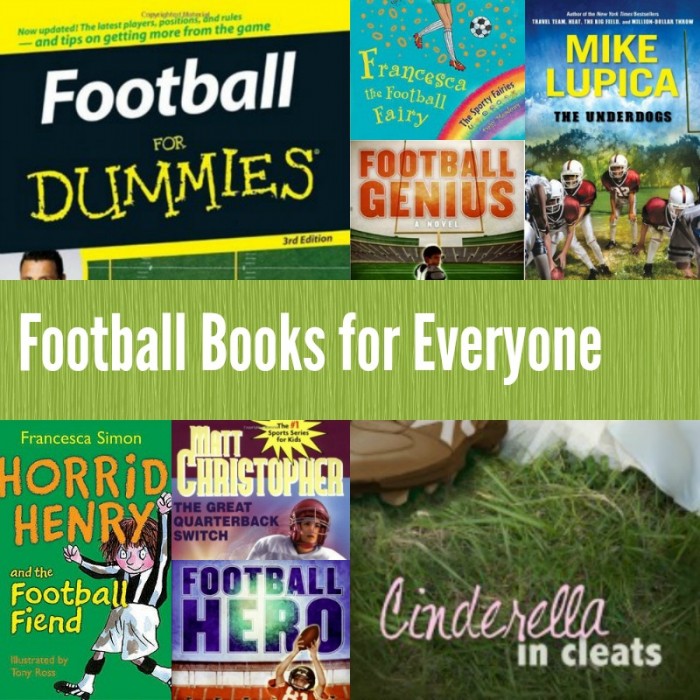 I know, I know, soccer isn’t really the same as American football, but I’m all about a fairy loving to play sports!

Will you tune in to the game or are you just there for the #superbowlads  ?

You know I love to party, but I don’t usually post food related items unless they are bookish. Recently I wanted to host the bookstore staff members to my house for a holiday open house.  After searching Pinterest for ideas I settled on a taco bar.  After finding how much it would cost to have it catered, at $9 a person, I figured I could do the thing myself for a lot cheaper!  I think you could use this party idea for a Superbowl party as well.

Here’s what was on the menu.  Serves approx 15.

For this party, the prep work is the hardest part. Prep isn’t difficult, but an important step that should be done early in the process, not waited until the last minute which I mistakenly did.  To make this party as easy as possible, I would chop the vegetables early in the day and refrigerate until needed. Here’s how I prepared for this party. It was super easy!

First thing in the morning I put the roast in the crockpot.  As mentioned earlier, you could use ground beef or turkey but i wanted to avoid another step by browning ground meat on the stove.  I highly recommend using crockpot liners. I tossed the roast in the crockpot, added perhaps a quarter cup of water, maybe less, and then poured approx 1/3 a package of taco seasoning over the meat. I put two jalapeno slices on top.  I didn’t want the beef to be too spicy because I was unsure of my guests tastes.  You could certainly use more seasoning and peppers to suit your crowd.

Additionally, in lieu of packaged taco seasoning you could certainly create your own with chili powder, paprika, cumin, etc.  Many of these ingredients are in the taco seasoning.  Again, the point of this party prep was shortcuts.

Cover and cook on low for a minimum of 4 hours.  My crockpot overheats quickly so 4 hours is a good guesstimate for my machine.  Yours may require 6 hours. Meat should be tender and fall apart with a fork.  When ready, keep on the warm setting until party.

If you have an additional crock pot, cook the chicken the same way.  I put a call out to my friends on Facebook a few days prior and was gifted with two additional crockpots.  If I had to do it over I would want two more for a total of 5. You’ll see why later.  I had a 10 pack of chicken breasts (purchased from BJs) in the freezer that i set out to thaw the day before.  I used 5 of the breasts in the crockpot for this recipe but since i thawed out the whole package, I boiled the other 5 breasts just in case the five in the crockpot weren’t enough.

Again, crockpot liner, and chicken in crockpot.  Use the rest of the taco seasoning packet, as desired. Add approx 1/4 cup water.  Cook on low for approx 5 – 6 hours or until the chicken falls apart with fork.  Chicken may take longer depending if you used fresh or partially thawed.  I find that partially thawed chicken tastes juicier when slow cooked. When done, keep on warm til party.

This is the stage where I would change if I had to do it again.  At this point, I left the kitchen and did other party prep things.  You, learning from my mistakes, should clean up the counter and then prep the veggies.  Slice up the tomatoes and  peppers into very small pieces and put them into separate ziploc bags and refrigerate until later.

At about two hours before the party, I started prepping the beans. I purchased black (Goya) and red beans and thought that I might cook them separately but in the interest of saving crockpots, I combined them.  I drained the beans, put them in the crockpot, and mixed them together.  I cooked on high in the interest of time.  I suppose you could have started them earlier and cooked on low. I don’t know.  I did not add any flavoring.  Beans are yummy enough in and of themselves!  Side note: I kept an eye on the beans to make sure they didn’t burn. I wanted them cooked but not burnt.  I eventually turned them down to warm once they were soft.

Now for the rice.  I love Goya’s yellow rice and I bought two boxes.  I started cooking them about an hour before the party. Again, learn from my mistake.  Cook them earlier in the day and then use a crockpot to keep them warm. This is the step that I wished I called in another friend for an additional crockpot.  Hindsight.  Anyway, I cooked the rice and then put them in a pretty dish with a lid, knowing they would not stay warm but hoping no one wanted to use the microwave (I was storing junk in it)!

And finally, the flour tortillas.  I totally made this part up.  I had my helper (#1 son) take 5 tortillas and wrap them up flat in aluminum foil.  We used approx 20 tortillas (two packages of 10?) and placed them on a large cookie sheet, alternating the layout so they all had access to heat, and cooked on 300.  I wanted them to be warm.  I pulled them out of the oven right before the guests arrived and placed on a tray on the table. I kept them wrapped in foil to stay warm.

Here’s how the display looked. 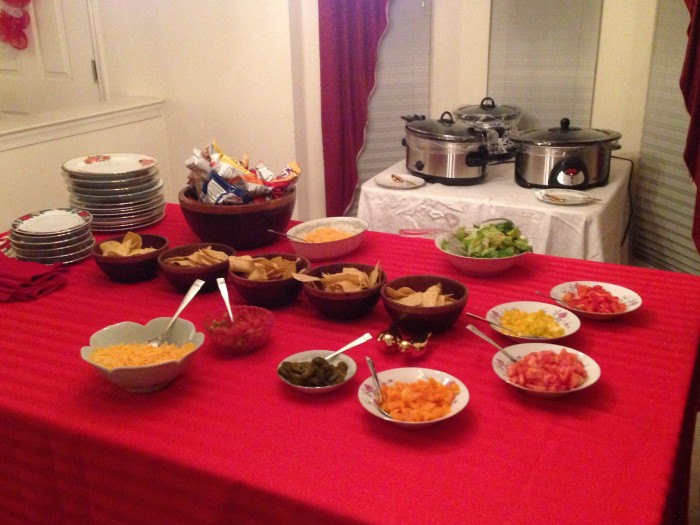 Mix and match all of your dishes you have for an eclectic look. People feel special when you use your good dishes; what else are they for? I happen to collect dishes so mine look especially mismatched, which I like. I covered the card table with a long white tablecloth. I didn’t want the ugly card table legs underneath to show.  The dining room table became the buffet table.  I covered it with a large red tablecloth and set aside red holiday linen napkins. I love using linen napkins because they go right in the wash and don’t add any extra waste in the environment. For plates I used a mixture of Christmas plates and clear plates and gold edged plates. I had large dinner plates and smaller sandwich plates if guests didn’t want a large plate, like if they were only getting a walking taco.
I used a card table in the bay window and plugged the three crockpots into a couple of extension cords. 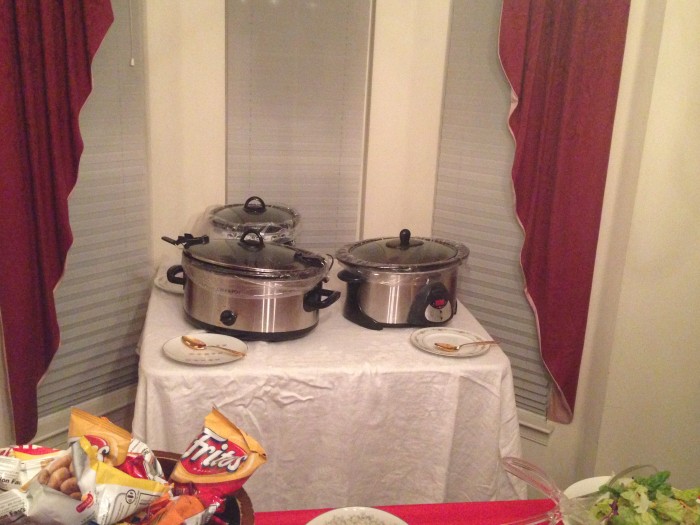 I wanted people to be able to get to the hot foods but not trip over the wires.  See from the photos how I set the table. My thinking was guests would take a plate and silverware first then grab a bag for walking tacos (mostly for the kids), grab a tortilla or two, then turn to their left and take whatever meat and or beans they wanted (Side note: if you are crocking the rice you would put it on this table as well, to utilize the extension cords).

After they’d chosen their warm foods, they could turn back to the buffet table and choose their fixins: cheese, lettuce, tomatoes, peppers, etc.  (Side note: I used bagged lettuce but you could certainly shred your own.  Make sure your bagged lettuce is fresh. Mine was a day or two old and while still edible, looked slightly sickly)

I placed the bags of chips in a large wooden salad bowl, however, there are plenty of different ways you could display them.  Use your imagination. I placed small wooden salad bowls down the center of the table and put tortilla chips in them.  Again, use your imagination on how to display.  These bowls became portable and found their way to various tables as guests congregated around the house.

I found this container with gold plated utensils that matched the gold rimmed dishes perfectly! I remember buying these utensils from my fave antique store. Swoon! 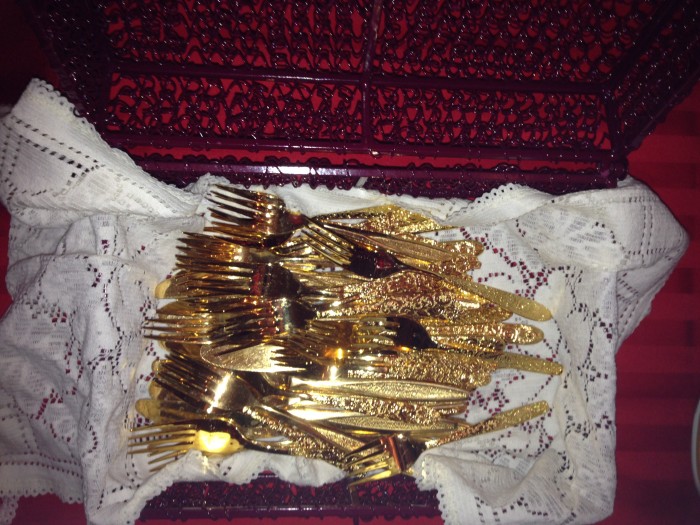 The bar was opposite the front door. 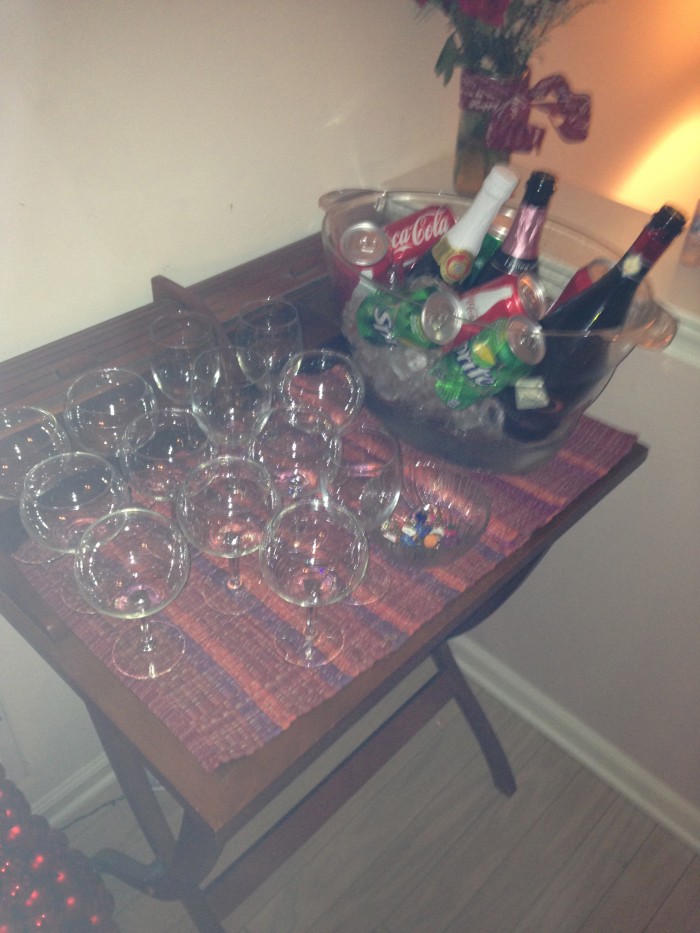 I like to place it there so guests can immediately do something with themselves while I put away their coats. I used all of my old wine glasses so that everyone, even the kiddos, could have a wine glass and feel special. Again, these are inexpensive, second hand glasses that can be re used and are good for the environment.

I wanted to keep drinks for the party simple, since the taco bar was complicated.  I only intended to offer Prosecco but the husband wanted to add a bottle or two of wine.  Cans of coke and sprite rested with the bottles of Prosecco in the ice bin.  Wine glass charms are in a small glass bowl by the wine glasses. 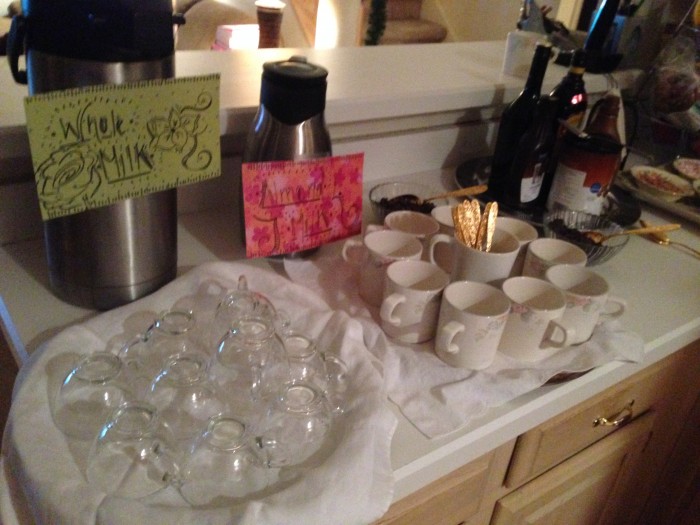 And now for the dessert bar: a hot chocolate bar.

Again, prep work is everything for the dessert bar. If I had to do it over again I wouldn’t have two of these kinds of things at the same party.

My thinking for the hot chocolate bar was that i didn’t want to be left with a bunch of cookies and desserts that wouldn’t get eaten at our house.  So I thought hot chocolate might work!

Check out the photos of the set up.  I let #1 son set up the bar and while it’s not how I would have set it up, he was proud of his display and it worked just as well.

Here’s what we offered:

There are so many ways you can display the hot chocolate bar, especially if you are creative and artsy; let your imagination guide you.  Many of my friends told me this type of party would be great for a Superbowl party but I think any party is a good excuse for a walking taco and your best dishes! 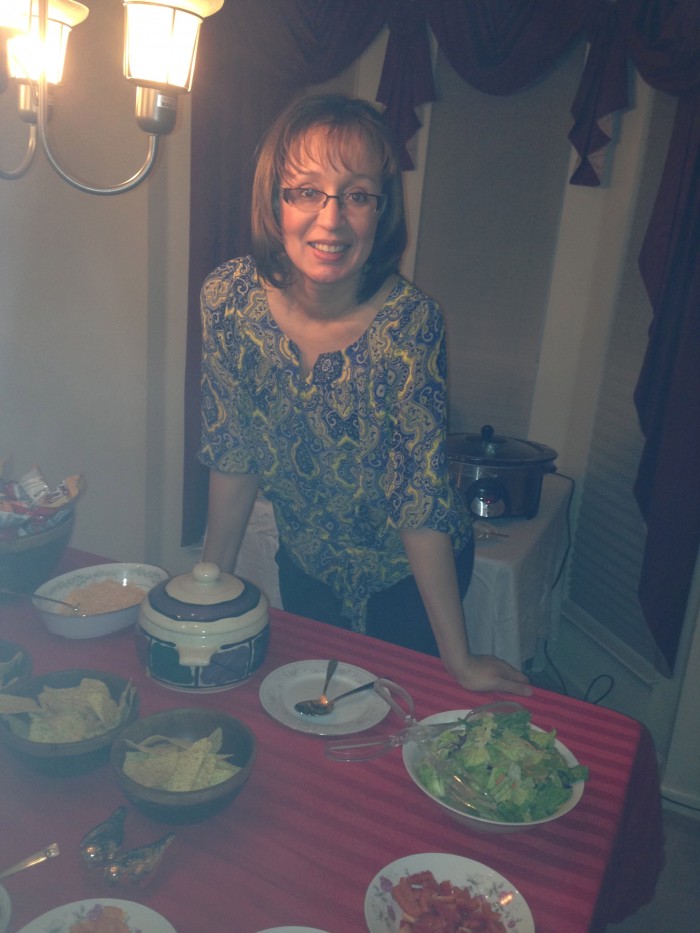