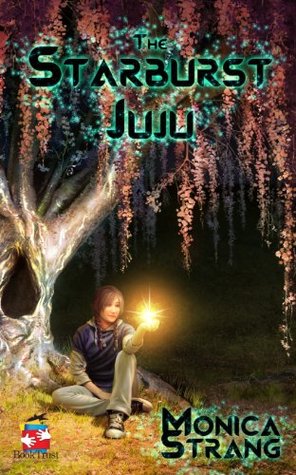 The Starburst Juju by Monica Strang

I know what you’re thinking. Starburst Juju? What IS that? It sounds like some sort of space age food. But it’s not. At least. partially. It does have to do with space though. Aliens actually.

Pepper, a 15-year-old girl living in the aftermath of an economically collapsed earth, prepares to witness the annual abduction of humans by extraterrestrials. When its Pepper’s parents who are taken, she learns that they are not the humble human schoolteachers she thought she knew, but two of the most powerful inventors throughout many worlds. Desperate to find them, Pepper will do anything to get them back, even if it means finding the otherworldly Starburst Juju, a stone that can free her parents from alien confinement.When Pepper’s schoolteacher parents are abducted by nasty creatures, Pepper and her best bud Parker go on a quest to find her parents. Along the way they meet a talking “cat , lots of aliens (many of them good), and attend school to learn how to fight the bad aliens.

Think Ender’s Game.  With a bit of Divergent thrown in.

Know what else is awesome?

A percentage of this purchase will go to Book Trust, whose mission is to deliver choice and ownership of books to children from low-income families, increasing their literacy skills and fostering life-long learning.