Ok maybe not really but did you ever wonder what he would be like if some of the stuffy old Shakespearean plays were rewritten with a modern twist?

Well, I have something for you. Shakespeare geeks unite because chic book geeks Amy and Kim reinterpret Shakespeare into a series called Twisted Lit.

And it’s fun! Here are the two I’m currently reading: 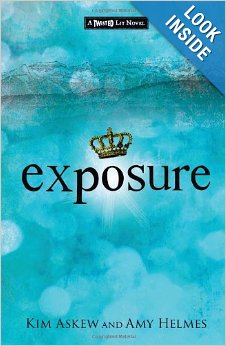 Double, double, toil, and trouble! The quest for high-school royalty can turn deadly when teen ambition outstrips reason. Skye Kingston is a shy shutterbug who prefers observing life from behind her camera lens. She doesn’t know she’s stunning, and comes off the sidelines only when she’s forced to by the terrifying events of one treacherous school year in Alaska. A boy named Duncan is dead, and his death may or may not be an accident. Skye’s three new best friends are eerily able to foretell the future, and cheerleader Beth might be more than a social climber–she quite probably is a sociopath.

Then there’s Skye’s growing attraction to the school hottie, Craig, The Boy Who Would Be Prom King. But their time is crossed by fate. There’s already been one death, and who can say if it’s only the first? As Skye falls for Craig, she also slowly realizes that he is caught in the crosshairs of a deadly plot. Can she save Craig and herself from a murderous fate? Exposure is not only a modern take on the classic Macbeth, it’s proof that nothing has changed since Shakespeare riffed on the subject nearly half a millennium ago: the quest for power can lead to bloodstained hands.

Sounds just like Junior year, right?  Now check this out..

After a mistake with big financial consequences topples her throne, former “it girl” Miranda Prospero is bitter: she finds herself stranded in a crazed new world, holding court among geeks and misfits at a mall Hot Dog Kabob stand. Then, she gets her chance for revenge.

When the storm of the decade snows in the mall workers and last-minute shopaholics for a long winter’s night, Miranda sets out to get back at the catty clique who was behind her exile. But there’s a complication. She somehow gets handcuffed to sullen loner Caleb. With him (literally) bound to her side, Miranda learns more in one night about her own heart, and human nature, than she ever did as prep royalty.

With this twisted take on Shakespeare’sThe Tempest, authors Kim Askew and Amy Helmes prove again that, from Juliet’s grief to Cordelia’s rage, no one knew about teen angst better than the Bard. His wisdom holds up nearly half a millennium later.

I love this series so hard. It’s like I wrote it myself. Except I didn’t; my two new besties Amy and Kim wrote it. To be sure, you prolly won’t get accepted into Oxford by reading this series, but they will certainly make reading Shakespeare less intimidating and a whole lot more relatable.

Check out my besties on their tumblr and see all the fun they’re having!