I have kind of a different book for you today. To be sure, the book classifies as multicultural, diverse and all those wonderful things that make the world go around:

My Name is Asher Lev by Chaim Potok 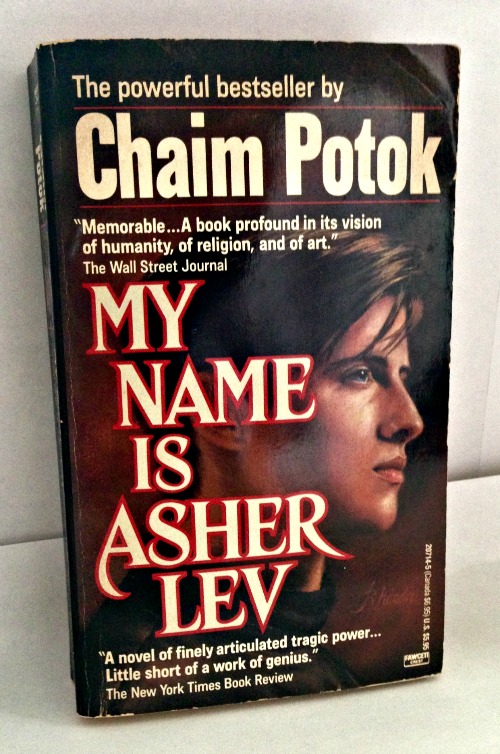 I’ve been promising myself to read this book forever and here’s why:

Asher Lev is a Ladover Hasid who keeps kosher, prays three times a day and believes in the Ribbono Shel Olom, the Master of the Universe. Asher Lev is an artist who is compulsively driven to render the world he sees and feels even when it leads him to blasphemy. In this stirring and often visionary novel, Chaim Potok traces Asher’s passage between these two identities, the one consecrated to God, the other subject only to the imagination.

Asher Lev grows up in a cloistered Hasidic community in postwar Brooklyn, a world suffused by ritual and revolving around a charismatic Rebbe. But in time his gift threatens to estrange him from that world and the parents he adores. As it follows his struggle, My Name Is Asher Lev becomes a luminous portrait of the artist, by turns heartbreaking and exultant, a modern classic.

Why on earth would I be interested in this? Well, years and years ago I happened upon another book by the author called, The Chosen.  You might have seen the movie, with Robby Benson, I believe.  Anyway, having grown up in a mildly nonreligious home (aside from attending church with my piano playing gram) I was interested in what makes devoutly people, kids, tick.

Since I had little knowledge of Jewish life, save for Fiddler on the Roof, I decided it was time to learn about other religions. I know I was pretty astute (nerdy) for a kid. I couldn’t  imagine a kid who is forced to behave one way while yearning to follow another set of rules, like art, for example.

I’ve since come to value the beliefs of most religions and find Hasidism especially interesting so that’s why I’m wanting to read about Asher Lev.

So tell me, have you read this book? What about The Chosen? Anything about other very strict Jewish cultures? Tell me so I can enjoy that book too!