Here’s a Friday Feature for ya. Brendan is my new English bestie, who happens to live in Australia and has a pet wombat (maybe). The book is called Beyond the Gloaming. 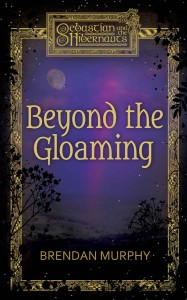 It is Easter, 1973 and twelve-year-old Sebastian Duffy has some serious self-esteem issues. He is beaten by his parents, bullied at school, steals from his friends and still mourning the death of his brother. To cap it all, strange things have begun happening around him and he is finding it hard to distinguish dreams from reality. After a nightmarish assault, he wakes in the Gloaming, a shadow world inhabited by ghosts. There to greet him is Porrig, a creature from Hibercadia, a magical realm crafted from Celtic dreams. Inhabited by Fir Bolg, Tuath and Milesians, it has been overthrown by brother gods from another dreamworld. One brother, Phobitor, is a tyrant and even the Tuath, who took to their underground sidhe millennia ago, are concerned. Sebastian discovers that he alone can save Hibercadia by finding an enchanted spear. Teaming up with the Hibernauts—a mercurial sorceress, an orphaned druidess, a taciturn warrior, a snuff-sniffing leprechaun and a lovelorn poet—he embarks on a fantastical quest, but can he succeed when he is yet to find his magical potential or even his courage, and half the realm is bent on his destruction?

Yah, you know how much I love the whole hero’s quest thing!

Did I mention this book is being made into a ballet?

Also (also?) if you check out Murphy’s website there’s fun stuff to explore like a map (LOVE MAPS)!

And here’s a party wombat!