SPOTLIGHT: The Color of Courage– A Boy at War: The World War II Diary of Julian Kulski

If there is going to be a war, I do not want to miss it. So writes Julian Kulski a few days before WWII begins, in this remarkable diary of a boy at war from ages 10 to 16. As the war unfolds through his eyes, we are privileged to meet an inspirational soul of indomitable will, courage and compassion. At age 12 Kulski is recruited as a soldier in the clandestine Underground Army by his Boy Scout leader, and at age 13 enters the Warsaw Ghetto on a secret mission. Arrested by the Gestapo at age 14 and sentenced to Auschwitz, he is rescued and joins the commandos. At age 15, Kulski fights in the 1944 Warsaw Uprising. He ends the war as a German POW, finally risking a dash for freedom onto an American truck instead of waiting for Soviet liberation. “

Yeah. So what were you doing when you were 12? Me? Singing along with The Jackson 5 or at Girl Scout Camp or at band camp.  It’s hard to imagine a 12 year old who wants to go to war, right? 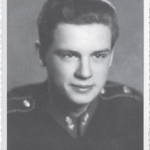 Look at that face! Ok so he’s not 12 anymore but he’s still very young. Too young to fight in a war.

“I can’t say I really want to die,” 12-year-old Julian Kulski writes, “but I can see now that there are times when one has to be prepared to do just that.”

The Color of Courage is a rare and vivid day-by-day eyewitness account by a young boy who becomes a man far too soon under the brutal Nazi German occupation of Poland. 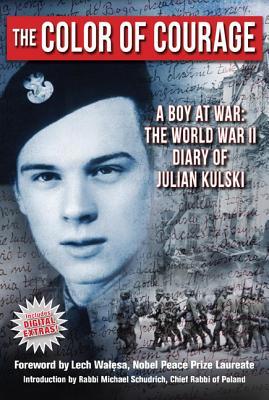 Julian is a 10-year-old Boy Scout when the Germans invade his native Poland to start World War II. At an age when most boys are still playing with toys, Julian begins his own private war against the Germans with small acts of sabotage. At 12, he is recruited into the clandestine Underground Army by his Scoutmaster, and begins training on weapons and military tactics.

By 14, he is holding up German soldiers at gunpoint, has gone on a secret mission into the Warsaw Ghetto to liaise with Jewish resistance leaders, is captured by the Gestapo, beaten and interrogated, sentenced to Auschwitz, rescued, and joins a Commando unit of the Underground Army. At 15, he fights in the Warsaw Uprising, ending the war as a German POW.

The war’s end brings physical freedom but very little peace for the 16-year-old veteran suffering from PTSD (post-traumatic stress disorder). A wise army doctor advises Julian to write down his experiences to help lessen the psychological and emotional burdens of the war. The Color of Courage is the result.

I know, right? Here’s a book trailer to pique your interest even more:

I think this will make the perfect holiday gift for the war hero in your life.