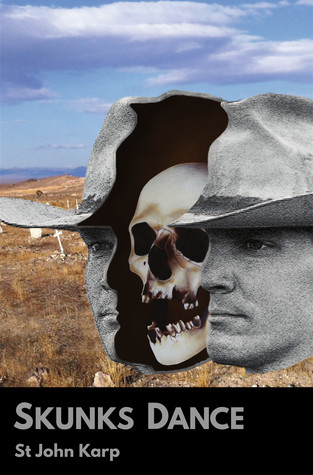 There’s always possibility that a book will surprise you. Skunks Dance is one of those books. First of all, the book came with a monocle, which I LOVE. I mean, who doesn’t love monocles? So, when you receive a monocle with a book, you hafta wonder is, who in the book wears a monocle? Right.

So we have an old Bible with ancient weird writings and a strange statue. There’s bound to be mischief and mayhem when you try to investigate the mystery of the two.

Spivey Spillane’s grandmammy always said there were only two good reasons to kill a man — for cheating on a woman, and for serving drinks to a Yankee. She may have had a hand in winning the Revolutionary War, but even she never met the likes of Alabama Sam. Sam robs a bank under Spillane’s name, casts him in an obscene one-man play wearing only a pink tutu, and starts a betting pool on how many wieners he has. Despite the indignities Spillane suffers, he chases Sam across Gold-Rush-era California because Sam is the only one who knows the location of a hidden fortune buried somewhere in the hills.

Meanwhile in the present, seventeen-year-olds Amanda and Jet have rekindled an old childhood rivalry. Amanda is obsessed with finding the treasure of her infamous ancestor Spivey Spillane. Jet and Amanda’s feud comes to a head over an extended incident involving a broken window, an exploded car, and a charge of sexual assault with a candy Batman. Jet vows that he is going to find to Spillane’s gold before Amanda does, but it doesn’t take them long to realize that someone may have come this way already — someone who wants the past to stay buried.

So, will the past get figured out?Will they figure out the mysteries of this weird old Bible? Did I mention that the main character’s parents are circus performers? What’s not to love?

I laughed the whole way through the book.