I’m featuring a book and an author today that sounds like an interesting read: the book is called I’m Here to Help by SF Chapman. 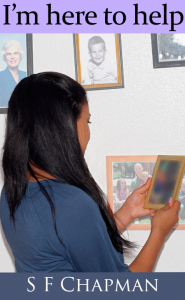 Here’s a synopsis of the book:

Seventeen-year-old Renita discovers some subtle inconsistencies in her birth certificate that put
her mother Sharonâ€™s long held account that she was adopted into doubt. Sharon decides that it is
finally time to tell Renita about both the laudable good deeds and the lamentable oversights that
had led them to the current situation.
Using a series of old framed photos that have hung for years in the living room, Sharon slowly
reveals the complex set of events involving a star-crossed trip to Mexico, a very young stowaway
Hispanic baby sitter named Juliana, the untimely death of Sharonâ€™s husband, the unexpected
pregnancy of Juliana, the eventual birth of Renita to Juliana and finally Julianaâ€™s struggle with
clinical depression that leads to her suicide.
Through some sketchy paperwork filled at the county recorderâ€™s office, Sharon was listed as
Renitaâ€™s mom.

Doesn’t that sound interesting? What would you do if you found some inconsistencies in your birth certificate? Me? I’d prolly question everything. And then eat some donuts. But that’s just me. Did I mention I have a niece named Renita? The story’s not about her, btw.Â  Pretty sure. At least, it better not be.

ANYWAY, If you’re like me, you’ve often wondered whether books were like newborns. You have to nurture them and feed them and help them grow.Â  Chapman discusses it for me. Let’s listen in, cuz it’s very insightful:

Early in July of 2011 when I was writing the first few chapters of my novel entitled Iâ€™m here to help, I was struck by an amusing analogy: Novels are just like newborns.

I chuckled back then as I scribbled out that phrase on a 3 x 5 card, which for me is a slightly more permanent way of retaining literary bits and pieces than using notepads or post-its.

Novels are like newborns; it is a poetic little gathering of amiable words. Perhaps they will find themselves clustered together in the center of song someday.

Being a father of two kids and one of the oldest of twelve siblings, I have been subjected to an uncommonly large number of newborns.

When I penned Iâ€™m here to help last year, I had already completed four other novels. I was certainly familiar with the long, slow process of nurturing a narrative along from a wispy notion to a wobbly collection of chapter summaries, then onward to a rough but promising first draft and eventually, after many stern admonishments from my three editors, a refined piece that could be sent out into the uncertainties of the world and stand on its own merits.

Producing a novel, or at least the initial writing of the chapters, is a thankfully brief undertaking thatâ€™s often quite similar to havin

g a newborn in the house.

Novels and newborns can be particularly demanding. Both become inexplicably fussy at times. Iâ€™ve discovered that sleep seems to cure the crankiness, at least for a while.

Babies and half-done books have a fascinating sparkly effervescence at times; often when you least expect it. Infants will sometimes coo delightfully while you exhaustedly change their diapers at 3 AM. The words of a partially completed novel will occasionally spring off the page and be far more descriptive and compelling than you had imagined earlier when you had scribed them.

One â€œcarriesâ€ around newborns and novels in an all-consuming way. If you are not physically lugging an infant, you are certainly thinking about the wee one. When you are not tapping away at the keyboard, you are mentally tussling with plot twists and dialogue.

Manuscripts and munchkins will both rudely awaken you at night and require your undivided but weary attention when youâ€™d really rather be in bed.

Thankfully, for me at least, the all-nighters spent with restless babies and nascent novels have been brief. When it is over and I look back fondly at the effort that went in those early months with my son and daughter or my various literary projects, I rather miss the protracted struggle.

Chapman is a very busy papa as he has two humanÂ  children, plus numerous post apocalyptic novel babies.Â  Let’s follow him on Twitter: @SF_Chapman Facebook: SF ChapmanÂ  and GoodReads: SF Chapman to see how his novel babies grow up!

Thanks for visiting SF, this looks like a good read!