The Secret Eater by Ros Jackson

I’m happy to highlight a fellow blogger who has become a writer.  Meet Ros Jackson and let’s discover The Secret Eater! 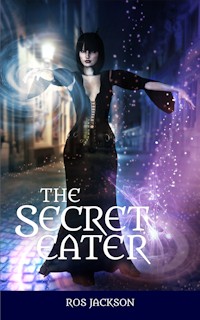 Here’s what the novella is about:

Kenssie is a demon who feeds from secrets. Lately pickings have been slim, and she has grown so weak that her shield of invisibility is slipping. As the servant of a demon who eats embarrassment she already feels like she’s the laughing stock of the demonic world. But the scorn of someone who thinks that Hawaiian shirts are the height of cool is the least of her worries.

A powerful fear demon is dead set on making her his slave, a position that carries seriously short life expectancy.

She has no friends.

Her only hope of escaping a life of terror lies in stealing a grimoire she’s never seen from the clutches of a vindictive group of master demons.

Here’s an excerpt from the novella with a first line that I LOVE:

Kenssie turned round from the bookshelf she’d been examining – herbals mostly, interspersed with the latest from Hugh and Nigella, but with some very interesting forbidden spellbooks sprinkled in. The woman was staring straight at her. Talking to her. And that could mean only one thing: she was a powerful witch.

“So you can hear me. Get off my things.”

Kenssie narrowed her eyes in a way she hoped was intimidating. She straightened her shoulders. Stared the witch directly in her deep brown, too-seeing eyes, and prepared to show her exactly why demons were feared. The witch stared back, unflinching.

“Come on,” the mortal demanded.

Kenssie focused, feeling her head swirl with the whispers of stolen thoughts, and an electric surge as her power coalesced in the air around her. It hummed with energy, ionising the air and making the carpet under her feet crackle with static. Soon, the woman’s life would be hers. Kenssie would have every moment from her birth onward. The power grew, swirling furiously like a wormhole tornado, opening a psychic portal between demon and victim that would flood her with power.

Kenssie was outraged. How dare this mortal speak to her like this! She focused her mind for a devastating pull, enough to rip ordinary mortals all the way down to insanity. She bared her teeth and felt the air grow thick, whilst the smell of copper and ozone filled her nose. Then she unleashed the magic.

And . . . nothing. Not so much as an embarrassing faux pas at a dinner party. Not even her name. Either the witch had just experienced an attack of amnesia that had wiped out her entire life history from memory, or she was extraordinarily resilient, even for a witch.

Kenssie’s shoulders slumped. At times like this, she was grateful for her thick, concrete-grey skin. The heat had risen to her face, but it would never show. It was time to scrape some dignity from the situation.

“You can see me because I wish you to, mortal.”

She stepped forward out of the corner of the room. Her attempt at a cool glide was hampered by a tangle of scart leads she hadn’t noticed, and she tripped and fell forward. She would have landed on her face, but the witch reached out and grabbed her shoulders. They hung for a split-second in an uncomfortable embrace. Then Kenssie righted herself and stepped back as though the mortal’s touch burned her.

She scowled. They stared at each other once more, witch to demon. Kenssie couldn’t read her at all.

“Er, sorry. Thank you,” Kenssie said, dropping the act. This was humiliating. Not only could she not hear a single one of the woman’s thoughts, she was making a fool of herself into the bargain.

“You should tidy that lot up, it’s a hazard.”

“You must be a very powerful witch.”

The witch looked at her strangely, head cocked to the side so her long, dark hair fell loose like velvet curtains.

Kenssie didn’t know what that stood for, but it was so like the humans to assign grades to each other for everything. Even so, level one didn’t sound very good.

“Still, I can foresee great things for you,” Kenssie said.

“Whatever.” The witch shrugged. “Just tell me who sent you.”

Kenssie grimaced at the implication. Nobody had sent her. She was her own demon!

There was still a chance to get out of this with some dignity intact. If this ever got back to Rakmanon . . . she didn’t want to think about the consequences. The witch was scowling at her, pink lips pursed, and Kenssie realised she’d better think of something fast. Focus. She’d just used up her last reserves of power, and if the witch turned on her, she could put Kenssie on her back for a month.

She reached behind her and pulled a thick book off the shelf.

“I came for this. This is demonic knowledge, not meant for mortals, and I’m taking it back.”

The witch’s scowl loosened and curled into a wry half-smile. “Sure, take it. I always suspected as much.”

Kenssie looked down at the tome in her hand. She was holding Nigella Express.

See that opening line:  “I can see you, demon” isn’t that the SPOOKIEST? I LOVE IT!!

For more information about Ros check out her website.

I can see you, demon. (maniacal laughter)