So This is Paris: Treachery in Bordeaux

Here we are with more of the winemaker’s mystery! This is the series that starts it all.  Here’s an excerpt:

The drive was short between Saint-Julien-Beychevelle, where Grangebelle was nestled, and the pier in the small port town of Lamarque. Benjamin drove the nine miles slowly to savor the crisp morning air and make the most of the always-comic show his quivering dog put on, his impertinent snout up to take in the view. The car was quickly loaded on the Médocain, a modern functional ferry stripped of all poetry. Benjamin felt nostalgia for the old captain, Commander Lemonnier, who skillfully piloted a straight-from- the-past boat called Les Deux Rives, an ancient pot-bellied tub whose curves became graceful when, in the hands of a real sailor, they caressed the sea foam. Lemonnier, a former Cape Horner and a formidable master mariner, had started piloting this fresh-water crossing between inland Médoc and the Blaye citadel when he was well beyond seventy. He was capable of steering his boat through fog and dark nights without using any sophisticated navigational instruments. All he needed was a compass, a chronometer, and a tide schedule to avoid the mud banks and skirt the treacherous islands of Île Verte and Fort Pâté, with its headlands. It took him barely twenty minutes to reach the other bank, and it was a pleasure to watch him in the wheelhouse, examining his little black Moleskine notebook, wherehe had noted maneuvering speeds and course durations, giving orders with a authoritative voice, and landing at the pier without even lifting his eyes from his chronometer’s silver box.

The other side was a foreign land, a place that you could reach with a cannon ball, if not with the lob of a slingshot. Like the kids from the Médoc, young Benjamin had dreamed of bloody attacks, galleys in distress, pirate raids, toothless buccaneers, and wild mutinies when he had spent summers here. And after a stormy night, when the current carried knotty peat, empty containers, and puffed-up plastic bags, he could still imagine combats and skinned corpses, their bellies filled with saltwater.

As soon as Benjamin landed on the right bank of the Gironde, he had the same feeling of adventure that had captivated him when his grandfather Eugène had taken him to visit Blaye. He parked the convertible in a downtown lot and headed toward the citadel. Bacchus barked and had already gone through the king’s gate when Benjamin started over the bridge leading to the ramparts.

Their walk continued for two full hours. Dog and master explored the fortress at great length: the Minimes Convent, the barracks, the prison and the powder magazine, the Dauphine counterscarp, the Liverneuf gate, the central pavilion, and the fortified flanks. Benjamin perchedon the Cônes stronghold, pausing for a long time to watch the estuary’s slow-moving muddy water. He stared at a swirling eddy in the distance, then set his gaze on a sailboat before eyeing some lone branches washing against the foot of the cliff.

Afterward, he climbed the Eguilette tower and took out his spiral notebook. He unscrewed the top of his fountain pen and jotted down some notes in his precise, swirled writing:

Vauban, a man from Dijon (develop this idea)… the two visits from the King (check the dates)… Fort-Médoc kids… fishing for freshwa– ter river shrimp… plaice fillets, court-bouillon (recipe with fennel)… Roland de Roncevaux (be concise)… do not forget Ferri, layout of Fort Pâté… arms factory, troop housing… the water is yellow, brown even, flowerbeds of the houses on the right… shops without giving any details, clock above the bridge, stone watchtower.

He crossed out “stone” and replaced it with “suspended.”

It was nearly noon when he turned back toward the middle of town. Bacchus was thirsty and was beginning to show signs of fatigue. Benjamin walked over to a cast-iron fountain and knelt beside the running water, cupping his hands to catch it for his dog to drink. They had enough time before the next ferry to visit an antique shop downtown.

Thanks for traveling to France with me and Le French Book! 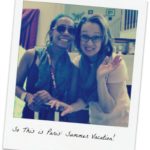