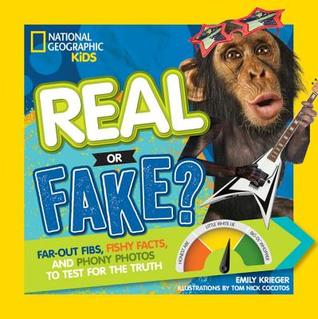 Far-out fibs, fishy facts, and phony photos to test for the truth

Here’s a fun book from National Geographic KiDS that kid will LOVE. Like all NGK books, Real or Fake contains great color photos with fun facts and wild interesting information that you might not learn about otherwise.  Here’s an example: An octopus that lives in trees in the US Pacific Northwest. Real or Fake?  The answer? Fake! Why? Because just like Bigfoot, it’s a made up thing. How about Chester the chimp who can play a guitar specially designed for him. The answer? Fake! As funny as it sounds, chimps can do many things but they sadly, cannot learn to play and sing because they don’t have the fine motor skills that humans have. But how funny would that be?

Is there really a place called Humpty Doo, Australia? Yes. What about Batman, Turkey? Yes. Cheeseburger, Wisconsin? Fake. What about Firenadoes? Is that a thing?

You’ll hafta Google it to find out.  In the meantime, grab several copies of this book because when you bring this book home everyone’s going to want to read it!

Did you know you can get a job as a pet food taster?