Ready?  Wash your hands and grab a cup of coffee and come on in…

Today’s feature is by my new bestie Felicia who has had quite an interesting life.  Here’s an excerpt from her memoir: LANDING IN AMERICA: A memoir story

It’s not that I didn’t want to go.  I did.  But a band began playing a sweet danzón and its syncopated rhythm released, without warning,  the prick of  loss.  Music does this  to me every time.  Bringing the past into the present. The Havana-Miami ferry was about to take off leaving behind the city of my  adolescence when the musicians started playing.  Red faced tourists fresh  from their  “week-end in Havana” sported loosely hung guyaberas  while their wives clutched the grotesque alligator  bags sold in tourist shops.   They were already high on  rum daiquiris and bracing  for a big night on the high seas while I found myself filled with foreboding as I watched the smokestacks belching gray mist into the scorching Cuban sun.

Once again we were on the move,  refugees no more but proper  immigrants with fresh visas tucked inside worn passports,  everything legal and correct, bearing not tired bundles but  hand stitched  pigskin  luggage, monogrammed steamer trunks and the black morocco  nécessaire containing Mutti’s cut crystal flacons and assorted beauty things.   The very nécessaire in whose false lining my father had buried diamonds when we fled Europe during the war. 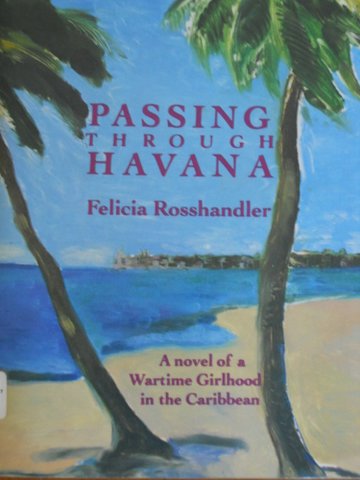 s 1948.  The American quota system,  God bless it,  had made us wait seven years before allowing us into the Promised Land.  Sort of like Jehovah with the Jews in the desert.  My parents, Maurice and Cilli, (that’s Tzilli, the  C pronounced as tz) had opened a fine bottle of  ron añejo  when the visas came although I would have been happy never to hear the word visa  again.  I remembered it only too well as the litany it had been as we tried to  get out of Europe.  Visa, laissez passer, take a number, the line forms to the right.  Poor Maurice, his Polish passport had been our albatross.  Nobody wanted us.
Except the “Pearl of the Antilles”, Cuba.  A few hundred  pesos under the table was all it took to plant us there for the next seven years, almost  half my lifetime back then, long enough to allow me to take root in that rich moist soil, long enough to believe I finally belonged somewhere.  Yet here we were on the move again.   It’s the last time, Mutti, my mother, promised.

My Havana classmates Lydia and Chabela came  to see me off, waving white handkerchiefs, but I saw only Eddie.  He didn’t wave anything, just stared.  At seventeen he was still a long skinny schoolboy with a jutting animated  Adam’s apple.   He had asked me to stay behind, abandon my parents, risk everything.  When I asked him how we would live, he had called me a silly little bourgeois.

At the last minute I saw myself  in a flimsy summer dress running down  the gang plank to  stand beside  him,  like in a film.   Startled, Eddie  pushes me into a taxi but before we can take off, my oldest brother opens the car door and pulls me out.   It is over in a minute.  A story I would hang on to for the rest of my life  though it  only happened  in my imagination.

Maybe I said no because  I was  too curious about America or just not  Cuban enough after all,  not anything enough, not in love enough, not mad enough, neither here nor there enough, me with my Czech mother and  Polish father, with two brothers  born in
Amsterdam and I in Berlin, raised in Antwerp and Havana, it’s too much, really too much to bear.  Back then people often mistook me for a diplomat’s daughter and  sometimes I went along, acting the privileged polyglot.   At other times  I exploited my history,  spinning  tales about  how we barely escaped deportation, the full drama of it.   I could be quite shameless.

The movies seduced me, sold me the idea that  the minute I set foot in America I would be transformed, become a star, bigger than life.  I was only seventeen of course, back in l948 when it was films more than books that taught you how to think and look and hold a cigarette.
Is it  that exiles remember better or does it come from old snapshots, this precise image of my family on the ferry’s  deck, four gauche overdressed passengers sipping frozen daiquiris and staring at the churning gulf stream that so swiftly separates two cultures.   Mutt,  in her salvaged couture outfit with the outsized  silk shantung hat is languidly leaning against the railing in a classic shipboard pose as if this were not 1948 but  another time, another place, as if she were on her way, so God help me, to the Côte d’Azure before the war.

Papi is at her side, looking stiff and stern, all things he was  not, wearing a double breasted suit, his wide trousers flapping in the wind.  And my brother Ernest, is looking very sportif, his shirt open at the neck and his cowlick slicked back,  smiling though I knew even then that he was traveling against his will. My eldest brother Leo, the scoundrel, was not with us.  He had absconded to Mexico ostensibly to study medicine though he quickly switched to art in order to paint like  Rivera,  Orozco and Siquieros who were as famous then as they are deprecated now.  Our parents looked down on the poverty of  artists but  I loved Leo for not being practical.    At the same time  I never quite forgave him for abandoning me  to the banality of our parents’ dysfunctional marriage. 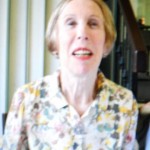 There was dancing on board that night  and I let a freckle faced boy straight out of an Archie comic briefly hold me in his arms.  My dress, made of a silky rayon cut on the bias, fluttered as we moved.  Eddie had always held me close but this boy’s  exuberant steps manhandled me like a rag doll.  Everything suddenly looked ridiculous and false,  all these tipsy clumsy American tourists doing the rumba , the conga, their frenzied gaiety shattering the stillness of the  moonlit night.   I  went back to the stateroom I shared with Mutti but she wasn’t there and I never heard her come in.

In my mind,  the crossing  has always stood out in black and white mixed with the smell of fresh paint and the sugary taste of the overripe pineapple we were served at breakfast.   In the morning, as the crew prepared to dock, I felt the enormous ferry tremble beneath my feet.  The light was brilliant.  My heart shrank.  Everything seemed enormous and unknown.

We took a  taxi to the New York train.  Through the window I saw, in the golden city of Miami, old  women teetering on platform shoes, their low cut dresses revealing baked, wrinkled skin.  The men followed in pastel colored slacks.  Not my vision of America.

I leaned over and said to Mutti:  “When I’m old,  I’ll be sure to always hide my arms and neck.”

Isn’t this the best story? Felicia has invited me to visit next time I’m in New York.  Sort of like opening Pandora’s box, I’d say. But oh the fun!

Thanks for popping by to visit; see you next time!