Kent Evans – A Crash Course on the Anatomy of Robots

An Unconventional Librarian likes to have a little bit of every day and I’ve managed to bring you a good time yet again.  You’re welcome.  A few years ago I managed to talk author Kent Evans into taking the Ford 99 Test for his book,  “A Crash Course on the Anatomy of Robots.”  Kent is half British, so as you read his report, do it in your best British accent. Be advised: there is LANGUAGE in this post, so if you’re squeamish, do your thing.  Otherwise, ENJOY! 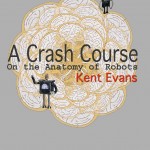 Hmm… so being woefully unaware of Ford Maddox Ford and his contributions to English literature, I was curious to see how I’d fair on his test. Considering my new book Crash Course flows freely between forms as diverse as 3rd person narrative, blogs, journal entries, and diatribes speaking directly to the reader – I guess it was inevitable that page 99 would land on the hardest thing for me to summarize: poetry.

Page 99 sits towards the beginning of a chapter called Anatomy of a Poet (part 1); within the larger section Portrait of an Artist as a Not So Young Man (A Crash Course on Survival).  They are exactly what they sound like, and this section is 3 pages into a narrative performance poem given as an example of the genre the protagonist is known for. Curiously enough, it is one of the few spots in the novel where race is tackled head on, as well as the main characters feelings about using it as a subject for art. He has been lamenting how his appearance (Asian, young, male), most especially as a performance poet, leads to the assumptions that one can:

tell you my state

which tell you my past

and who am I to say

“motherfucker you don’t know me!

Take your shit somewhere else!”

cause I accepted my cage

when I acknowledged you and your ignorant hypocrisy

Damien, the protagonist has grown frustrated that, as a Chinese American writer, everyone expects him to constantly write about and answer to his heritage. The character, in his mid-Twenties and living in mid-90’s New York, has written a piece which, whilst railing against this perceived perception, is the very sort of work he has been complaining about. Realizing this midway through the poem he switches gears and asks:

So what if I threw off these chains

And told you I was

and a little Swiss Dutch girl?

what if I told you I was

or a comet chewing quasars?

The question he asks himself and the fictional audience, as well as the reader, is:

Would you say I was buggin’?

Would you call me a poser? 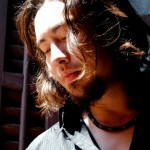 The inquiry is both Damien’s internal monologue and a sincere questioning of how he views himself, and other slam poets of this era. It also exposes some of his insecurities, like his feeling of robot like isolation that contrasts his desperate desire to connect, which ride below the surface of the novel as a whole.

Note: Amusingly enough, this section is one of the 8 in the novel which I wrote and recorded musical accompaniment for. It comes free with some electronic versions; otherwise it’s available on iTunes, Amazon, and whatever you can think of.  Check 2:50-4:15 on track 5, and see how an audio test of good old Ford holds up.

I’d say a little deranged, Kent, but what’s wrong with that?

And you thought poetry was dry and boring.  Yay for broetry!

How’d you do with your British accent? Mine needs a little work; I sound like Eliza Doolittle, but whatevs, right?