The unforgettable novel of a childhood in a sleepy Southern town and the crisis of conscience that rocked it, To Kill A Mockingbird became both an instant bestseller and a critical success when it was first published in 1960. It went on to win the Pulitzer Prize in 1961 and was later made into an Academy Award-winning film, also a classic.

Ok, so WHY am I reading this?  Two great reasons:

This gives me double the reason to read the book, right? What’s that you say (cupping ear)? Didn’t I read that in High School or College?  No.  I don’t remember. But I did see the movie. Ok some of it. Ok I’ve seen the scene with Gregory Peck in it. But anyway, what a great time to catch up on this famous read, right? 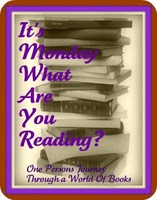 Take a moment and head over to BookJourney and see what others are reading this Monday.  Go on…scoot!