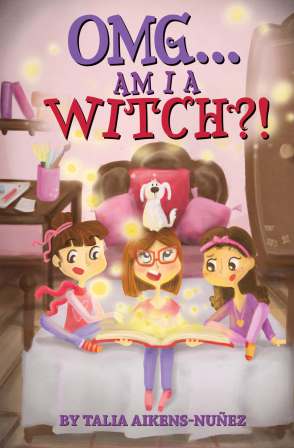 April Appleton is so annoyed at her older brother that she searches the Internet for a spell to turn him into a dog. When the spell works, April realizes she has more powers than she ever dreamed of! Now she has to figure out how to turn him back to normal before her parents find out. She has little time, but with help from her friends Grace and Eve she finds a book of magic that will hopefully reverse the spell. Will it work, and will April’s newfound magic save the day?

Oopsie, that sounds like a teeny bit of a problem, right?  But a fun one to have, right?

So, check it out and see if April can change her annoying brother back into a human boy.  Brothers can be annoying but parents frown on changing their children into animals; no matter how justified.

So to answer your question, YES you are a witch. No not YOU, dear reader, you’re not a witch, ok well you might be a witch, but I’m really speaking to our heroine, April.  She, indeed is a witch, because she really did turn her brother into a dog. And thanks to her bestie Grace and new friend, Eve, they figure out what to do.  Fortunately, new friend Eve, is a descendant of New Orleans relatives who practice magee (that’s French for magic) and are in possession of an old book of magic.

Can you say HILARITY?

This fun book was written by Talia Aikens-Nunez, a name that sounds musical enough to say over and over again!

You can find Talia on Facebook and at other blog stops on this TLC tour!

Oh yeah, did I mention that I’m a stop on the TLC Book Tour? Welcome aboard and enjoy the trip.

p.s. Don’t tick off your little sister or she just might turn you into a dog.  Or something worse.