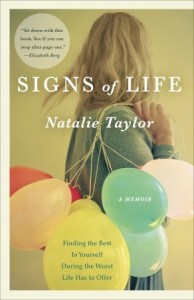 “Death is but crossing the world, as friends do the seas; they live in one another still…yet their friendship and society are, in the best sense, ever present, because immortal.” –William Penn, More Fruits of Solitude

Natalie Taylor wonders if JK Rowling placed those words in Harry Potter and the Deathly Hallows for her. In fact, Taylor holds a conversation with Rowling on the phone.  I didn’t know that there was someone else in the world who talks to book characters or their authors.  I’ve had plenty of conversations with Jane, from Jane Eyre.  I commiserated when she was abused by her cousins.  I was one of the friends who comforted her when she was publicly humiliated at school.  I told her that Rochester was a little moody and she could do better.  Given Natalie Taylor’s love of literature, I am not surprised she turned to literature during her grief.  While the books she turned to would not have been my picks, I understand just the same.

Natalie and I are both widows.  Widowhood is a distinction few wish to hold. Natalie became a pregnant widow after her new husband died in a carve boarding accident. I, too, am a widow.  I’m a divorced widow.  What exactly is a divorced widow, you ask?  I was married, then divorced, then my ex-husband died.  Prior to becoming a divorced widow, I had never heard of that phrase. The government thinks of everything.

I am currently happily remarried, but at the time, I was devastated.

My ex-husband and I had been divorced a few years and had moved on with our lives.  We had two children together so he saw #1 son and Pumpkin frequently.  I decided that just even though our marriage couldn’t be saved, it was still important for the kids to see their father as much as possible.  I moved from Austin back to Pittsburgh, my hometown.  One day, as you’re going about your day you receive a phone call.  Of course, you’re not expecting bad news so when you answer and it’s one of your ex’s relatives, you’re not surprised because you’re very close to her.  You cannot believe the news you’re hearing, your ex is dead. He was 38.

My ex left behind 3 children, one from his first marriage and two from his second (me).  Just like Taylor, I was in shock.  I couldn’t believe it.  My family rallied around for support: my mother helped me tell the children.  It was unbelievably the worst thing you ever want to tell your children: their Daddy was dead. The kicker? It was suicide.  How’s that for a double whammy? So now not only are my kids different because their father is dead, but one day I must tell them their father chose death over them.  THAT is a stigma no one wants: abandonment. I was angry. So very angry.  The depth of my anger scared me.

I had no way to express that anger except through physical exertion. Pittsburgh weather in February can be brutal and I couldn’t get out of my driveway to get to the airport to attend his funeral.  The city was shut down. Flights were barely taking off. There is no better physical activity in mid-February Pittsburgh but shoveling snow.  And shovel I did.  I shoveled my sidewalk. I shoveled my neighbors’ sidewalks. I shoveled my car out.  I shoveled my father’s car out. The snow was thick and heavy so it was hard work.  I shoveled to the point of exhaustion. When the men came outside and offered to help, I turned them away.

I’m sure you’re wondering why I would care to attend my ex-husband’s funeral.  Believe it or not, despite how bad our marriage was (and it was bad) I wished no ill for my ex.  He was the father of my children and a human being.  I had been able to put my life back together and was happy to be out of his control.  I would rather have my ex-husband alive than knowing my kids could never see him again.

Unlike Taylor, I avoided grieving.  Like Taylor, I graciously accepted phone calls, cards, and condolences as the strong widowed mother of two young children.  I hurt inside, though, and my body took the beating.  Unlike Taylor, I did not seek help.  One day, after getting kicked out of a graduate night class due to my coughing, I finally went to the doctor:  Bronchial pneumonia.

Can you imagine the author with whom I had a conversation?

I felt a Funeral, in my Brain,

And Mourners to and fro

That Sense was breaking through –

And when they all were seated,

My Mind was going numb –

And then I heard them lift a Box

And creak across my Soul

With those same Boots of Lead, again,

Then Space – began to toll,

As all the Heavens were a Bell,

And Being, but an Ear,

And I, and Silence, some strange Race

And then a Plank in Reason, broke,

And I dropped down, and down –

And hit a World, at every plunge,

And Finished knowing – then –

Yes. Emily Dickinson: I Felt a Funeral in my Brain. Yes.

She knew how I felt.

During the fifth month of her pregnancy of her first child Natalie Taylor is devastated by the sudden death of her husband. Her journey with grief is chronicled in the memoir Signs of Life. Join From Left to Write on March 29 as we discuss Signs of Life by Natalie Taylor. As a member of From Left to Write, I received a copy of the book. All opinions are entirely  my own.

How do you grieve?