A Future Arrived by Phillip Rock a TLC Book Tour

So here we come to the final installment of the Passing Bells trilogy, with A Future Arrived. 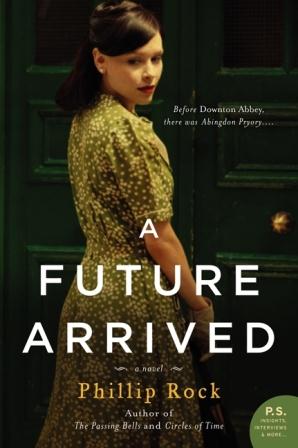 I’m sad to see the series end.  To be sure, I have mixed feelings about the trilogy.  Touted as a companion to Downton Abbey, it’s almost completely different from Downton Abbey in that there is less about the lives of the servants downstairs and more about the lives of the beautiful and rich upstairs.  But that alone, is not a reason to discount the trilogy.  If you yearn for the recent historical past, you’ll love this series too.

I love a writer who can keep up with all of the character’s lives, introduce new characters and not get too convoluted in the telling and merging of their stories.  I believe Rock has done this well.  Now, in book three, I am reminded of why I liked or hated the characters from book 1, but am still able to enjoy the lives of the newer characters as they struggle with the similar problems of war.  The grandson of Lord Greville is now a main character, as well as the young brother in law of our favorite reporter, American cousin Martin Rilke.  The Grevilles have stopped yearning for the Edwardian days and have accepted the future and the mixing of social classes. Not that they really had a choice.

During the course of the series I’ve learned the ins and outs that led up to World War I.  I feel as if I’ve become an expert.  I also feel like I was experiencing life in the trenches and on the streets of London.  Post WWI I feel as if I was taking a slight vacation and allowed to have a little fun and relax.  I was also aware that WWII would come and I wasn’t sure how Rock would introduce our characters to it.  Rock did not disappoint, he provided a thorough look at how life can be ruined by war.  Interestingly enough, given that I learned about war was from the American viewpoint, I feel as if I have a broader understanding of how ugly and devastating war is.

If you don’t like war stories or need a bit more of an emotional setting, this is not the book for you, but if you want to develop relationships with characters, this trilogy will satisfy you just fine.