If you’ve been around here longer than a minute you know I love my dog. He’s often in photos and buttons and pops up all over my social media imprint. I can’t help it. He has these big dark eyes that just beg you to give him a belly rub. While we love him so, he’s kind of a doofus.  Or so we thought until I decided to test his IQ in this fun book called Test Your Dog’s IQ by Rachel Federman. 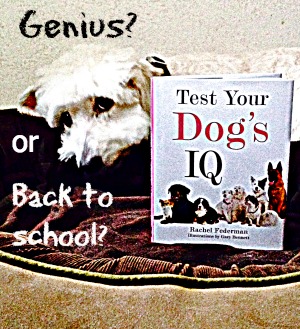 Bailey is part Bichon possibly part Poodle and maybe part Westie. While he’s a sweetheart at home, he doesn’t like strangers, kids on bikes, birds, squirrels, the UPS truck, the vacuum, and can just barely give paw for a cookie.

The interesting bit about Bailey is that when we’re sick he’s extremely attentive, will always sit for a cookie, and can read our signals and knows when to get in his crate. So…he can’t be all that dull can he?

I dunno.  I’m halfway through the book and while he’s scoring relatively well on interpersonal cues, my fear is that he is going to fail the active test. You know, the stuff that will put him into the Mensa class: finding the treat under a cup, sit, stay etc.

He’s only 20 pounds so when he’s really misbehaving it’s no problem to pick him and carry him away from the offending vacuum. Do you think a genius lurks behind those “don’t hurt me” eyes?

What  tricks can your dog do?

How would you rate your dog’s IQ?

CoSchedule it and Forget it: A Tutorial for Organizing your Book Reviews and your Life